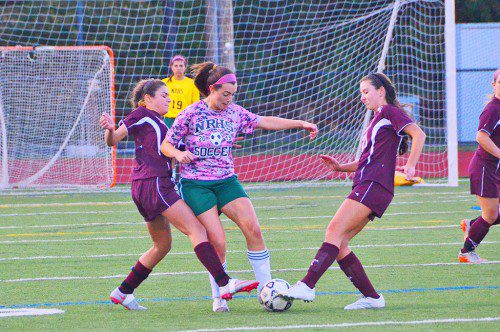 NORTH READING — The Lady Hornets qualified for the state tournament for the third consecutive season with their 2–1 victory over a superb Masconomet Chieftains squad on October 13. The Chieftains are ranked 14th in the Boston Globe Top 20. Juniors Haley Nathan and Marissa Zarella scored for North Reading.

Masconomet jumped out to a quick 1–0 lead with their goal in the 11th minute. The goal didn’t faze the Hornets who responded a minute later when Zarella sent a beautiful through to Nathan on the far post for the equalizer. The goal settled the game back down and the first half ended deadlocked at 1–1.

The second half was back and forth until Zarella put North Reading on top. On the play Zarella found a loose ball near the top of the box and fired a shot under the cross bar to make it 2–1. The Chieftains’ late efforts to get back in the game were thwarted by the back line of junior Gianna Moscaritolo, sophomore Kirsten Bradley, junior Jessica Muise and sophomore Meredith Griffin who preserved the victory.

The Hornets recorded their 10th win of the season with their resounding 4–0 home victory over the Newburyport Clippers on Thursday night. Seniors Jill Comeau and Maddie Syer, sophomore Rachel Hill and Marissa Zarella scored for North Reading. Junior Katerina Hassapis recorded her seventh shutout of the season.

Comeau got the Hornets off to a great start when she opened the scoring with her unassisted goal early in the first half. Hill added another goal with junior Jessica Muise picking up the assist and the lead was 2–0 at the halftime whistle. North Reading continued to be in control in the second half. Syer and Zarella added insurance goals and the Hornets cruised to victory.