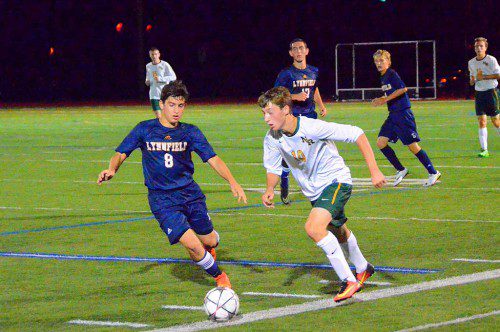 LYNNFIELD — The boys’ soccer team is back in the Division 4 North state tournament after the Pioneers went undefeated last week.

“We are thrilled to be back in,” said Pioneers head coach Brent Munroe. “Getting into the tournament while playing in the Cape Ann League Large Division is tough to do. Hopefully we play well the last few games and get a good seed.”

The Pioneers missed the tournament last year. Munroe said the locals’ defense played a key role in this season’s turnaround.

“I am really pleased with our defensive group,” said Munroe. “They have really propelled us this year.”

Senior captain Matt Seelig scored the Pioneers’ only goal of the contest five minutes into the first half. Senior captain Will Klotzbier was credited with the assist.

“They both saw some action but there weren’t too many shots,” said Munroe.

“We didn’t play our best game,” said Munroe. “Georgetown’s goalie played well and kept them in the game.”

Sophomore Nathan Bass scored the Pioneers’ first goal of the game 10 minutes into the first half, assisted by sophomore Jonathan Luders.

Sophomore David Gentile scored the locals’ second goal off a header halfway through the first half.

“It was David’s first goal of the season,” said Munroe.

Triton scored its only goal of the game with five minutes remaining before halftime.

Senior forward Patrick Passatempo scored the Pioneers’ third goal with 15 minutes remaining in the second half.

Fabbri and Campbell split time in net. Munroe said both goalies each had a “couple of saves.”

“It was a great way to get into the tournament,” said Munroe. “Triton is usually difficult to score on even though they are having a tough year and I am happy we were able to score three goals. We gave everyone a chance to play, which is great. It was a great team effort.”

After a scoreless first half, Bass scored the Pioneers’ only goal with 20 minutes remaining in the game. Luders had the assist.