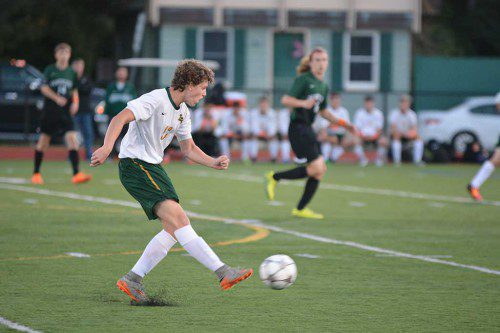 NORTH READING — The Hornets returned to the road on and were downed by the host Georgetown Royals 1-0 on October 5th.

It was a defensive battle in the first half. Neither team scored and the game was tied 0-0 at halftime. The second half remained tight. Unfortunately the Royals scored the lone goal of the half and eked out the 1-0 victory.

The Hornets squandered a two goal second half lead in their 2-2 tie with the Rockport Vikings on Friday afternoon. Senior Carlos Moreno scored both goals for North Reading.

North Reading controlled play in the first half and had a handful of good scoring chances. But the Vikings goalie stood on his head and thwarted each opportunity keeping the Hornets off the scoreboard. The half ended deadlocked at 0-0.

The Hornets missed another golden opportunity early in the second half and in the 45th minute it looked like Rockport would strike first. Luckily senior Liam Rutherford made a superb save on a breakaway to preserve the tie.

Three minutes later North Reading rewarded Rutherford with a goal when a Moreno stole an attempted back pass to the goalie and slid the ball into the net. Moreno added another goal in the 51st minute when he floated a shot from about 20 yards out over the goalies head and it looked like the game was well in hand.

But after a missed penalty by senior captain Michael Finocchiaro in the 60th minute, everything changed. Just a minute later Rockport raced down and scored to pull within one. After their first goal the Vikings kept the pressure on and in the 71st minute they scored the tying goal.

The Hornets are now 5–4–1 with 11 points and are in fourth place in the CAL’s Kinney Division. They were back in action Tuesday, Oct. 11 at Hamilton–Wenham at 3:45 p.m.