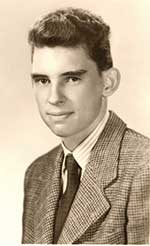 He was the son of Sherman H. Sr. and Marea J. Murphy, the brother of David A. Murphy and wife Ann of Scotland, Ga., and the sister of Sheila H. Williamson of Wilmot, N.H.

A lifelong resident of North Reading, Sherman graduated from Reading High School in 1949, enlisted in the U.S. Coast Guard in 1952 during the Korean Conflict and was Honorably Discharged in 1960. He married the love of his life, Alma A. Baratta, from Somerville on Oct. 8, 1955 and built their home on Park Street where he lived until his death.

Sherman was a proud member of the International Union of Operating Engineers, Local 4, and ran heavy equipment of many large construction projects including Government Center and City Hall Plaza in Boston. He was very proud of his work and liked to drive by construction sites with his family on weekends, pointing out difficult grading issues and construction problems that he helped resolve.

Having grown up on a farm, Sherman was always a farmer at heart, and enjoyed cultivating a plot of land behind his home, growing vegetables for his family for many years. He enjoyed camping and fishing when his children were young. He enjoyed telling stories about growing up in North Reading when he was a junior warden during World War II and bringing his vegetables to sell in the Haymarket in Boston.

He was an unapologetic homebody who enjoyed the ocean, eating lobster, discussing politics (always with a Democratic point of view) and being at home with his cherished wife. The family would like to express their appreciation for the kindness and assistance of the North Reading Police and Fire Departments. In lieu of flowers donations may be made to CSF Dollars for Scholars Endowment Fund, P.O. Box 529, North Reading MA 01864. NorthReading.DollarsForScholars.org

His funeral Mass was held in St. Theresa Church, 63 Winter St. on Oct. 5. Interment was in Riverside Cemetery, North Reading.