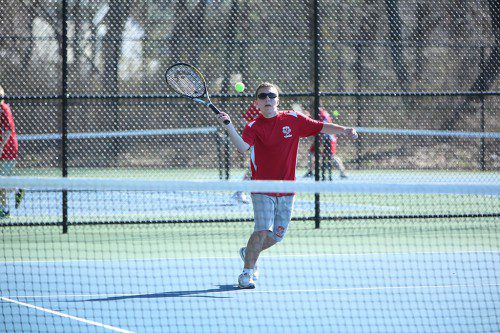 MATT HOENIG, a senior, played at first doubles with freshman Jon Stumpf and the Warrior duo cruised to a 6-1, 6-1 triumph in the season finale against Watertown. The Warriors won the match, 4-1. (Donna Larsson File Photo)

WATERTOWN — The Warrior boys’ tennis team ended the 2016 season on a winning note.

Wakefield swept Watertown for two of its four wins as it defeated the Red Raiders by a 4-1 tally in the season finale on Wednesday afternoon at the Victory Field Courts.

The Warriors posted a 4-12 record this year.

Wakefield won every point except at third singles. The Warriors won 3-2 in the first meeting at the Dobbins Courts with the wins coming in the three singles matches.

At first doubles, senior Matt Hoenig and freshman Jon Stumpf faced the Watertown tandem of Mahdi Alhady, a junior, and Karl Elbakian, a senior. Hoenig and Stumpf cruised to a 6-1, 6-1 triumph.

Juniors Soren Helhoski and John Stanfield were teamed at second doubles. They took on the Red Raider duo of sophomore Jeremy Ornstein and senior Chris Palvakanian. Helhoski and Standfield posted a 6-4, 6-2 win.

The lone Watertown point came at third singles. Zack Covelle, a junior, dropped a 3-6, 4-6 decision to Alex Abrahamya, a sophomore.