Boys’ tennis team finds the wait was worth it 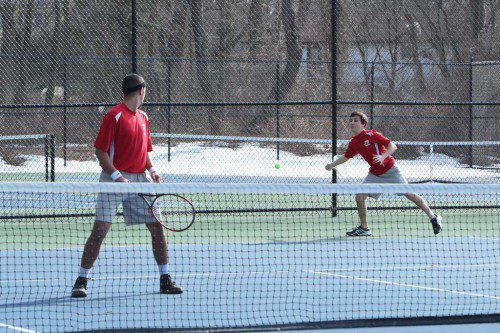 WATERTOWN — Due to the late melting and all the rain, the Wakefield Memorial High boys’ tennis team played only its second match of the season yesterday afternoon at the Victory Field Courts as it took on Watertown in the Middlesex League Freedom division opener.

The wait was worth it for the Warriors as they posted their first victory of the season with a 4-1 triumph over the Red Raiders.

Wakefield is now 1-1 on the season having lost to Lexington in the season opener last week,

The Warriors won all the contests except at third singles where Watertown earned its lone point.

Mike Mouradian, a senior, took on Genrikh Askaryan at second singles. Mouradian prevailed in a hard fought three set match. The Warrior senior lost the first set, 4-6, but came back and took the second and third sets, 6-1, 6-3.

Wakefield also won a hard fought three set contest at first doubles where the Warrior tandem of Chris Calnan, a senior, and Noah Sellers, a sophomore, faced the Red Raider duo of Dana Harris and Alex Abrabamyan. Calnan and Sellers won the first set, 7-5, dropped the second set, 3-6, and rallied to take the third set, 6-4.

The second doubles match also went in favor of the Warriors for their fourth point of the match. Sophomores Zack Covelle and Soren Helhoski faced the Watertown tandem of Madi Alhadi and Hakeem Alhadi. Covelle and Helhoski won in straight sets, 6-2, 7-6 (8-6).

At third singles, James Hanron, a sophomore, dropped a 5-7, 4-6 match against Kareen Alhadi.

The Warriors will look to make it two wins in a row when they take on Stoneham on Wednesday afternoon at 3:30 p.m. at Stoneham High School.