Girls’ tennis team makes the most of Dobbins Courts opener 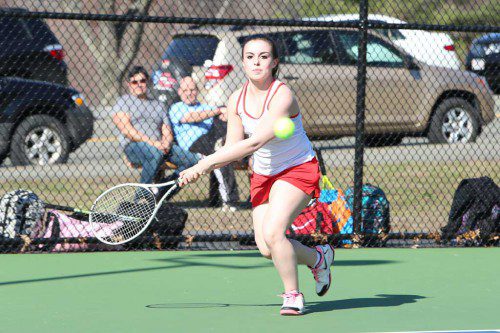 WAKEFIELD — The Warrior girls’ tennis team played its first home match of the season outside at the Dobbins Courts yesterday afternoon and made the most of the opportunity in the warm, sunny weather as it cruised to a 5-0 shutout over Watertown in the Middlesex League Freedom division opener.

Wakefield is now 2-1 on the season with its first victory of the year coming against Woburn on the indoor courts at the Boston Sports Club. That was considered a home contest for the Warriors.

Sarah Stumpf, a junior, took on Sarah Rahim at second singles. Stumpf prevailed by a 6-3, 6-4 tally.

Mollybeth Whitson and Darcy Drago, both juniors, were teamed at second doubles and they took on the Watertown duo of Jess Russo and Rebecca Hellman. Whitson and Drago won by a 6-3, 6-4 tally.

Wakefield will host Stoneham tomorrow afternoon at 3:30 p.m. at the Dobbins Courts in a M.L. Freedom division contest.