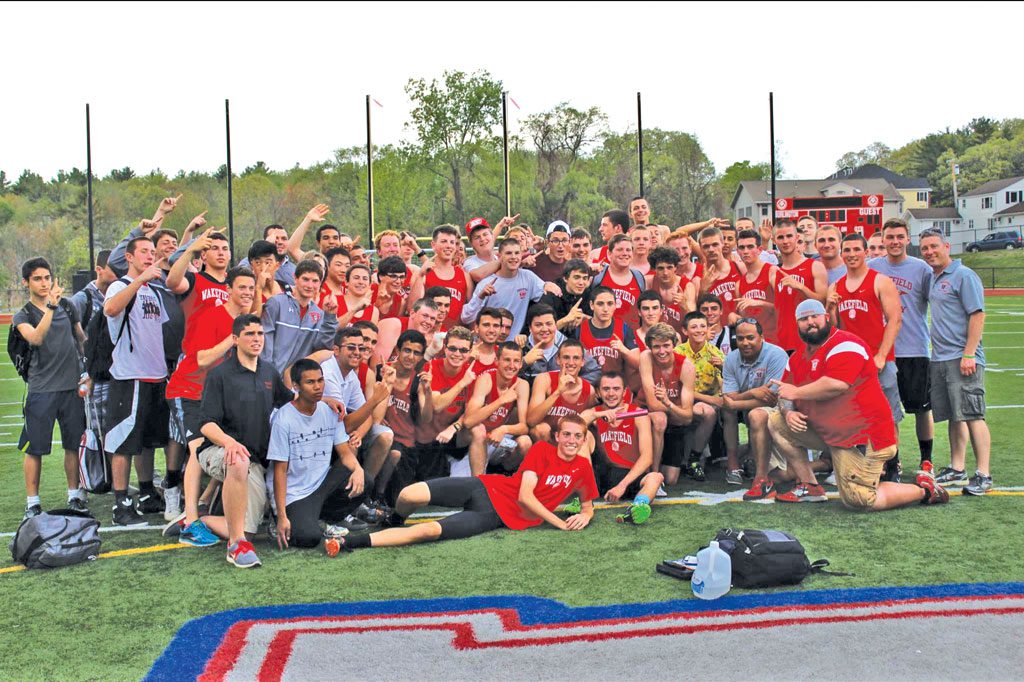 THE WMHS boys’ outdoor track team captured the Middlesex League Freedom division title yesterday with a 71-65 triumph over Burington. It is the first outdoor title for the Warrior boys’ track team since 1973.

BURLINGTON — For the second time in as many seasons, the Middlesex League Freedom division championship meet was between the Wakefield Memorial High and Burlington High boys’ track teams.

Like the indoor track dual meet title, the outdoor dual meet championship meet was another nail-biter as the Warriors triumphed by a score of 71-65 score yesterday afternoon before a big crowd in attendance at Varsity Field in Burlington.

Wakefield wrapped up its M.L. Freedom division dual meet at 5-0 and captured its first league championship in outdoor track since the 1970s. The last title won by Wakefield was a M.L. co-championship with Reading in ’73.

“So after an exciting indoor season we came out and made it even more exciting outdoors,” said Head Coach Ruben Reinoso. ” It was a packed stadium in Burlington. In addition to the parents we had former Warriors Cam Mitchell, Pat Scheeler and Brett Tassinari (there) as well.”

The mile was expected to be a great race between the two of the best milers in Div. 3. Senior captain Ian Ritchie faced off with Colin Raposa of Burlington. Raposa got the win in a time 4:27. Ritchie ran a fast time of 4:33 despite the hot temperature to capture second.

“Ritchie’s value is much more than the points he earned,” said Reinoso. “It forced their best runner to run against him, opening up other events like the 800 and two mile for our guys to grab big points.”

Freshman Matt Greatorex had a stellar kick to snag third place down the straightaway for a huge point. His time of 4:57 was a 15 second personal best. Junior Alex Guerriero just missed breaking the five minute mark running 5:00.6.

In the 4×100 relay, Burlington got the win with a time of 44.9 seconds which set their school record. Wakefield’s 4×100 relay though ran one of its best times (45.6 seconds) and the runners were junior Jian Glenn Gallardo, sophomore Dan Sallade, senior Kyle Geaney and junior Kevin Russo.

Wakefield was down 15-8 going into the field events.

In the long jump, Pat Casaletto, a senior, was in third place going into his second jump. He had jumped 20-2 and the two Burlington kids had jumps of 20-5 and 20-8. Casaletto answered by jumping 20-9 for the win.

Although Alex McKenna, a sophomore, didn’t place in the high jump, he had a personal best of 5-9.

Currently, these are the best two jumpers in the D3 and are top five in the state. Hurton’s jump is probably one of the best in Wakefield since the current record holder Donald Bulfinch in 1968.

Ben Joly, a senior, competed in the shot put and answered as he always has done for Wakefield this season by taking first in the event with a throw of 50-1 3/4. This is the second meet Joly has thrown over 50 feet.

Burlington swept the Discus and the 110 hurdles. Going into the 100 meter dash Burlington was up 51-35.

In the 100 meters, junior Eric Chi ran another fast time of 11.1 seconds for first place and Russo was second with a huge personal record of 11.1 seconds. This was a crucial event as Wakefield closed the gap to 52-43.

Hurton was second in the 400 meter run with personal record of 52.2 seconds and Cam Yasi, a senior, was third with a personal best time of 53.6 seconds. Burlington led 57-47 at that point.

In the 800 meter run, senior Jack Gallagher controlled the event from start to finish but had some company. Junior Alec Rodgers and Burlington’s Tom Taranto and Ben Margalit all ran tight the whole way. It was only down the final 100 meters that Gallagher and Rodgers pulled away to finish 2:02 and 2:03 for first and second place. Both had state qualifying times.

In the 200 meter dash Wakefield needed at least a second in order to have a chance at winning the meet and Chi answered as he always does with a second place performance as he clocked in at 23.1 seconds.

Burlington led 64-58 at that point and needed just five points to win the meet.

Going into the two mile, the Warriors were down by points. Adam Roberto and Richie Custodio, a sophomore and a junior, led early and grabbed some key points to force the meet to come down to the 4×400 meter relay. Both just missing the state qualifying mark of 10:24 as they posted times of 10:24.5 and 10:26. Both ran a cautious pace from the start.

After the two mile the score was Wakefield 66, Burlington 65 and the Warriors needed to secure first in the relay to win. Yasi, Rodgers, Ritchie and Gallagher combined to run a great time of 3:32 for first place. Burlington’s entry timed 3:42 as Wakefield won the event and the meet, 71-65.

“We have so much depth on this team as it showed because when were down going in to the two mile we still had two of our best runners left to compete,” said Reinos. “I talked to the coaches last week and told them that we were not going to out coach ourselves, we were just going to put our guys in their events and let them compete. I also challenged the athletes before they got on the bus and told them that no matter what happened in this meet just to promise me one thing that they wouldn’t quit.

“This was not just for the meet. This is a life lesson that is going to help them years from now. That when things get tough they should hold on and finish whatever they have started because if they do they will earn these three things — courage, honor and respect. We gained courage because we achieved something we didn’t know we could achieve. (We have) Honor because people will honor you when they see what you have accomplished. Respect must be earned and we have earned respect in the Middlesex League.”

The Warriors will now gear up for the Div. 3 state relays which, ironically, will be held at Burlington High School. The state relays are on Saturday at 9:30 a.m.