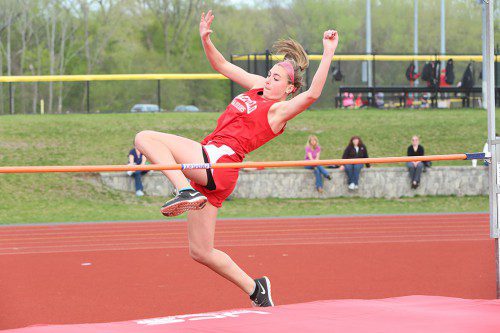 ALLEE PURCELL, a freshman, came in second in the high jump with a 4-7, won the 400 meters in a personal best time of 62.6 seconds and was a member of Wakefield’s first place 4×400 relay team. (Donna Larsson File Photo)

WAKEFIELD — In yesterday’s Middlesex League Freedom division showdown at the Beasley Track and Field facility between the Wakefield Memorial High and Burlington girls’ track teams, there were many fine performances and even some personal bests.

Unfortunately for the Warriors, more of those clutch efforts came from the Red Devil athletes as Wakefield’s league title hopes were dashed with a 75-61 defeat.

“This was a very winnable meet,” said Coach Karen Barrett. “Burlington had some good performances and I don’t want to take anything away from them. But we didn’t step up like we needed to. It’s disappointing. On paper, I had us winning, but hats off to Burlington. They had an amazing meet and had a lot of personal bests.”

Even though the Warriors are the runners up for the second straight year, there were some good performances from several of their athletes yesterday afternoon.

“Allee Purcell won the 400 meters and beat their number one runner who is pretty good,” said Barrett. “I’m very happy with how we did in the mile, 400 hurdles and long jump. Sam Ross got a big win the in the triple jump and Anna Lucas got us three points in the 100. We got four points in the 200, their girl ran a personal best. The two mile went as expected and so did the high jump.”

The meet started off with the Warriors taking first and third in the 400 hurdles. Abby Harrington, a sophomore, and Nicole Galli, a senior, posted times of 70.9 seconds and 72.4 seconds.

Wakefield then captured first and second in the mile with Sara Custodio, a junior, and Jordan Stackhouse, a sophomore, clocking in at 5:42 and 5:49. Custodio qualified for states in the mile and Stackhouse ran a personal best time and earned her varsity letter.

That resulted in Wakefield holding a 14-4 lead when the field events started.

The field events, particularly the throwing events, is where the Red Devils built up a big lead outscoring Wakefield 27-1 in the shot put, javelin and discus. Barrett knew Burlington had some good throwers but she would have liked to have seen her team score a few points in those events.

The Red Devils went first and second in the javelin with Stephanie McFrates and Danielle McFrates taking the top two spots with distances of 119-1 and 102-11. Julia Derendal, a junior, had a throw of 96-1 in the javelin for a third place finish.

Sophomore Alex Rollins qualified for states in the javelin with a fourth place finish as she had a throw of 93-0.

Burlington swept the shot put and captured firsts in both the high jump and long jump. Wakefield had second and thirds in both of those jumping events. In the high jump, Purcell cleared 4-7 and senior Jill Raso cleared 4-5. In the long jump, Harrington finished second with a distance of 15-1 and Jill Cataldo, a junior, leaped 15-0 for third place. Cataldo’s distance was a personal best.

The Red Devils swept the discus even though Derendal had personal best throw in the event and finished fourth overall.

When the running events resumed, Burlington had a 44-28 advantage.

Avery Parece, a junior, captured first place in the 100 hurdles in a time of 17.8 seconds while Burlington took second and third.

In the 100 meter race, Lucas came in second overall at 13.3 seconds. The Red Devils got first and third. Barrett felt that Wakefield could’ve score more points in the event and would like to have seen her sprinters do so.

Purcell clocked in at 62.6 seconds to capture first place in the 400 meter run as she ran a personal best. Raso came in third overall in a time of 64.6 seconds.

The Warriors got a second and third place in the 800 meter run. Senior Emily Hammond and sophomore Cassie Lucci ran times of 2:25.6 and 2:41.1. Burlington’s Carly Gillis won the event in a time of 2:25.5 as the race was a close one between her and Hammond.

Burlington’s first place finisher ran a personal best time of 26.4 seconds in the 200 meter dash. Ross and Lucas secured the second and third places with times of 27.0 seconds and 28.0 seconds.

Freshman Hailey Lovell got her varsity letter in the 200 with a 28.0 seconds. She took fourth.

The Red Devils led 67-50 after 13 events and Wakefield need to sweep the remaining events to win the meet. That didn’t happen as Burlington got a second in the two mile to clinch the victory.

The Warriors did claim first place in the 4×400 relay in a time of 4:26.9 to Burlington’s 4:31.9. The four Wakefield runners were Purcell, Harrington, Raso and Hammond.

“We’ll move on from this,” said Barrett. “We will try to beat them in the league championship next Tuesday. We’ll go for that. We were more than capable of winning this meet. We have a talented group. Things just didn’t go our way. It’s disappointing.”

First up is the Div. 3 state relays on Saturday at 9:30 a.m. at Burlington High School. The M.L. championship meet is Tuesday, May 19 at 4 p.m. at Regis College.