Warriors have many good performances, take fifth overall in meet 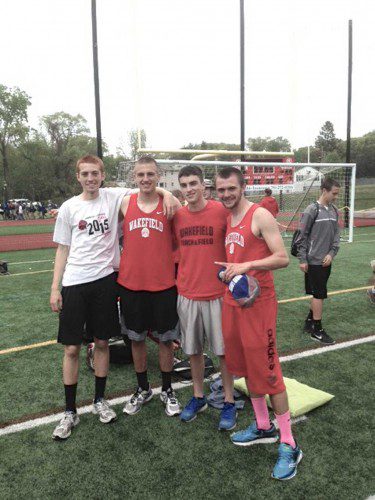 THE 4×400 relay team consisted of (left to right) Ian Ritchie, Joe Hurton, Cam Yasi and Jackson Gallagher. They won the Div. 3 State Relay title and ran 3:25.08 and broke the school record from 1976.

Memorial High boys’ track team returned to Varsity Field and had a very good showing at the Div. 3 state relays on Saturday.

The Warriors finished fifth overall with 37 points and was in a two-way tie for fifth place with Pembroke which also scored 37 points. According to head coach Ruben Reinoso, this was the best the Warriors have done since they won it in 2000.

“It was a great weekend to be a Warrior for the boys’ track and field team. We had several great performances and set some school records and three teams came close to qualifying for Nationals,” said Reinoso. “At the end of the day we were five points short from winning the D3 state relays championship. But this didn’t take anything away from all the great things that our team accomplished this weekend.”

Burlington and Bishop Feehan tied for first with 42 points, while Tewksbury and Milton tied for third place with 41 points.

Starting with the 4×200 meter A relay team, not only did the Warrior beat their seed time by almost two seconds, they ran from the slower heat to place fifth overall and they were just .05 seconds from coming in third which Reinoso believes would have happened if they were in the seeded heat. The entry ran a great time of 1:33.86 and they are just .86 seconds from qualifying for nationals. The runners were Eric Chi, Kyle Geaney, Cam Yasi and Joe Hurton.

Yasi, Hurton, Ian Ritchie and Jackson Gallagher were the four runners. Yasi started Wakefield off with personal record split 51.6 seconds. Hurton took the baton and was a little behind but made up some ground and ran 52.3 seconds. Ritchie took the lead with about 200 meters to go and came in at 50.56 seconds. Gallagher, as he always does with about 50 meters to go opened up and took the lead, running a 50.17 second 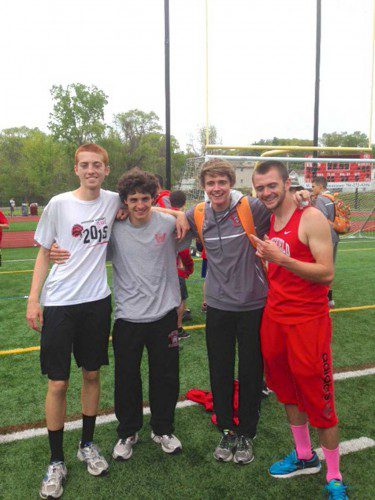 THE 4×800 meter relay team broke the school record and won the Div 3 title with a time of 8:03.69. From left to right are Ian Ritchie, Adam Roberto, Alec Rodgers and Jackson Gallagher. The record was previously held by Aaron Lucci, Rodgers, Pat Scheeler and Ritchie.

They not only won but they also set a school record and they were less than a second off the meet record which is held by Bishop Feehan at 3:24.30 in 2000. Wakefield’s former school record was from 1976 and the time was a 3:26.7. The current Warriors are also two seconds off from qualifying for nationals.

Wakefield also captured a victory in the 4×800 relay as the A team clocked in at 8:03.69 which is tops in Div. 3 and second in the state. The Warriors won by seven seconds.

Gallagher started things off with a strong leg that he led from the gun. Sophomore Roberto ran very good as he left the competition behind with 200 meters to go. Rodgers opened up a big lead as he ran a personal best all by himself while Ritchie pushed hard to secure the win. They will likely be accepted in the New Balance Nationals meet since they were less than a minute off the recommended guidelines.

The Distance Medley relay had a solid sixth place showing with a time of 11:34.69. Richie Custodio had a very good lead leg as he ran 1200 meters in 3:26 and kept it a tight race with the leaders. Jian Glen Gallardo ran a good 400 meter leg in 55 seconds. Roberto worked to stay with the top pack of teams and ran a very good time of 2:09 despite coming off a hard effort in the 4×800 just 10 minutes earlier. When Rodgers received the baton they were in sixth place and he held that spot with a 5:01 mile after he too only had about a 10 minute break after his 800 meter leg.

Wakefield had two entries in the sprint medley relay. The A team of Tyler Whipple, Geaney, Joe Boudreau and Tyler Strauss came in 13th place at 4:00.04. The B team included Jeremy Keegan, Peter Crump, Alex Jancsy and Riley Brackett. They finished in 22nd place at 4:25.31.

Zach Conlon, Greatorex, Ben Thompson and Lucey were the four Warrior runners on the 4×400 B relay team. They finished in 21st place at 4:02.44.

Wakefield had two 4×100 relay teams entered in the meet. The A team finished in eighth place in a time of 45.18 seconds. Gallardo, Henry Stikeman, Dan Sallade and Chi were the four runners. The B team came in 30th at 48.80 seconds. The four runners were Jancsy, Devin Pronco, Eric Smith and Alex McKenna.

The 4×200 B relay team timed in at 1:40.81 for a 21st place showing. McKenna, Dan Summers, Stikeman and Brian Dickey were the quartet of sprinters.

Wakefield also had some good performances in the field events.

Strauss, McKenna and Pat Casaletto had combined height of 16-2 1/2 for a sixth place finish in the high jump.

The long jump relay team had a distance of 58-5 1/2 for a fifth place showing. Yasi, Gallardo and Casaletto were the trio of jumpers.

Pronco, Geaney and Hurton captured third place in the triple jump with a combined leap of 115-5.

The shot put grabbed fourth place with a combined throw of 128-9 3/4. The three throwers were Jared Regan, Pat Redmond and Ben Joly. Redmond, a freshman, had a throw of 42’8 which qualified him for states. He is the first freshman to qualify for states in the shot put in a long time.

The discus relay team finished 10th with a distance of 289-4. Joe Connell, Joly and Dan Wensley were the three Warrior participants in the event.

Sean McNall, Jancsy and Smith combined for a throw of 371-7 for a sixth place showing in the javelin.