Brewers even the score against Expos in Twi League finals 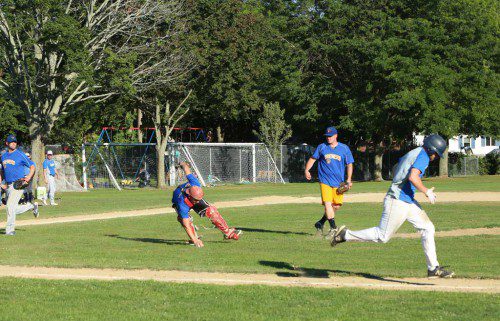 BREWERS CATCHER Joe Greer (left) fields the ball in front of the plate and throws the runner out at first base in the opening game of the Twi League Baseball finals. In Game 2 last night, Greer had two hits, scored a run and drove in a run in the Brewers 7-4 victory over the Expos to even the best-of-five series at one game apiece. (Donna Larsson File Photo)

WAKEFIELD — The Brewers tied the Twi League finals at one game apiece with 7-4 win over the Expos last night at Moulton Field.

Four runs in the bottom of the second inning gave the Brewers their first lead.

Mike Greer led off with a single just over the head of shortstop Andrew Worden and, after a fly out to left, he stole second. Tom Leahy singled to right and then Joe Greer drove in Mike Greer with a single to left. After a pop up to first base, Leahy stole third with Expos catcher Tom Kelleher’s throw going into left to allow Leahy to score and make it 2-0.

Then, Drew Betts reached on an error that scored Joe Greer to put the brewers up 3-0. Andrew Patti singled to left but Mike Cannata’s relay throw to second went off the mark for an error that allowed Betts to score the Brewer’s fourth and final run of the inning.

The Expos managed to get two runs back in the top of the third.

Chris McNall led off with a single to center and then Jason Brooks followed with a single to left. After a fly out to right, a passed ball put runners at the corners. Steve Boghos grounded out to third but that was enough to allow McNall to score. Worden singled in Brooks to make it 4-2 before a pop up to short ended the inning.

The Brewers gave themselves some insurance runs in the bottom of the sixth.

Darren Bisso led off with a single and was pinch-run for by Mike Fiore. Brian DiRuzza doubled down the right field line to score Mike Fiore and make it 5-2. After a pop up to short, Myke Fortier blasted a triple to center that scored DiRuzza. Leahy then hit a sacrifice fly to left that allowed Fortier to tag up and score for the Brewers third and final run of the inning to make it 7-2.

The Expos were able to chip away in the top of the seventh for two runs but it wasn’t enough.

Brooks led off with an infield single on a so-called swinging bunt. Two pop ups to short followed but then Worden doubled to left to score Brooks. Dave McDonald singled in Worden to make it 7-4, where it would stand.