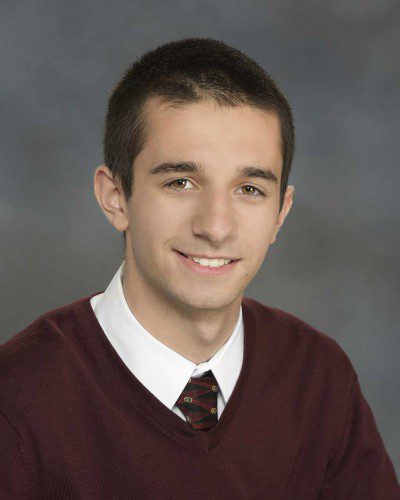 NORTH READING — Peter Spinelli of North Reading has been presented with the General Ira C. Eaker Award denoting successful completion of all the achievements of the Civil Air Patrol Cadet Program. The Eaker Award is the CAP’s newest award for cadet achievement, having been implemented in December 1995. The award honors the late Air Force General Ira C. Eaker, aviation pioneer, career military officer and one of the chief architects and visionaries of the U.S. Air Force.

The Eaker Award is a major milestone in the Cadet Program. This award is earned after the receipt of the Amelia Earhart Award, completing all of the achievements in the cadet program, completing the Cadet Officer School (or equivalent) and passing a writing and speech requirement. Approximately 200 cadets per year receive this award.

Spinelli is a senior graduating with honors from North Reading High School, where he serves as senior class president. He is also a member of the Student Council and Student Senate.

In the fall, Spinelli will be attending the Isenberg School of Management at the University of Massachusetts Amherst. At Isenberg, he is considering a double major in both Finance and Operations and Information Management.

Peter started in Civil Air Patrol at Camp Curtis Guild when he was 12 and transferred to Beverly. Last summer, he attended Cadet Officer School at Maxwell Air Force Base in Alabama, an academically challenging course for cadets patterned after the U.S.A.F. Squadron Officer School.

Spinelli serves as cadet commander of the Beverly Civil Air Patrol Squadron and holds the rank of Lieutenant Colonel. Immediately following graduation, he will begin testing for the General Carl A. Spaatz Award, CAP’s highest honor, presented to cadets who have demonstrated excellence in leadership, character, fitness and aerospace education.