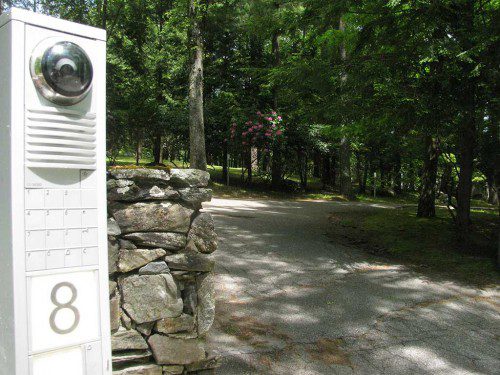 THE PROPERTY at 8 Needham Rd. was rented out for a party when a 33-year-old Randolph man was killed early Sunday morning. (Mark Sardella Photo)

By DAN TOMASELLO and MAUREEN DOHERTY

LYNNFIELD — The investigation into the house party murder over the holiday weekend at 8 Needham Rd. is ongoing.

Lynnfield police and fire responded to the shooting at the gated mansion that is set back far from the road at 3:06 a.m. on Sunday, May 29. Police found the victim suffering from multiple gunshot wounds, according to published reports.

According to Essex District Attorney spokeswoman Carrie Kimball Monahan, the victim was Keivan Heath, 33, of Randolph.

On Tuesday morning, she told the Villager that Heath’s murder “remains under investigation. There’s nothing really new to report.”

Deputy Fire Chief Glenn Davis told the Villager that he was among “the first on scene with an engine company and an ambulance. We got dispatched for a person shot and we responded.” Davis said the victim was provided ALS (advanced life support) services by the Lynnfield ambulance duty crew and transported to Union Hospital in Lynn. “That was our level of involvement. I know the police are still investigating,” he said.

Heath was pronounced dead at the hospital.

The murder remains under investigation by both the Massachusetts State Police detectives assigned to Essex District Attorney Jonathan W. Blodgett’s office and Lynnfield Police, Monahan said. Asked if there were any alleged suspects or motives, she said, “We don’t typically disclose details about the investigation while it’s ongoing.”

No arrests had been made in the case as the Villager went to press Tuesday afternoon.

Lynnfield Police told the Villager that the last murder to take place in town occurred on Nov. 22, 2010 at a residence on Ledge Road. It was a double murder/suicide in which the gunman murdered both his former girlfriend and her sister before turning the gun on himself.

According to WCVB-TV, Alex Styller rented out his multi-million dollar mansion to a group of people for what he thought would be a small college reunion of about 20 people. Styller informed NECN the renters told him they did not know Heath.

“Probably, this party got out of hand and some uninvited people came in,” Styller told reporters on Sunday.

Styller informed NECN that he rents the six-bedroom, five-bath mansion on over three acres of land through several websites. For this rental, he used a service called HomeAway.

According to published reports, Styller said he was called at about 8:30 a.m. Sunday by his real estate agent who informed him that a shooting had occurred at the house and “somebody got killed.”

Board of Selectmen Chairman Phil Crawford informed the Villager on Tuesday that Styller had illegally rented his home because the town’s zoning bylaws prohibit short-term rentals.

“The zoning bylaws do not allow short-term rentals,” said Crawford. “There are regulations and this home was rented illegally.”

Crawford also told the Villager that Town Counsel Tom Mullen is crafting a cease and desist letter on Tuesday to be sent to Styller seeking to prevent future short-term rentals at this property. He explained that Styller will have 30 days to file an appeal to the town’s Zoning Board of Appeals. If Styller does not file an appeal, Crawford said the town will file an injunction that would seek to prevent “future rentals.”

Additionally, Crawford said the town might look into developing additional zoning regulations to present to a future Town Meeting to prevent this type of situation from occurring again.

“The AirBnB phenomenon has concerned a lot of communities,” said Crawford. “We are looking out for the safety of our residents. That is our primary concern.”

While Selectman Chris Barrett noted the town has regulations prohibiting short-term rentals, he said the time has come to re-visit the issue.

“I am deeply disappointed this happened in Lynnfield,” said Barrett. “I want to look at strengthening our policies and bylaws to make sure something like this does not happen again.”

Styller told reporters over the weekend he will continue to rent his home to guests. It has been rented for corporate retreats, family reunions and other gatherings.

The town of Wakefield tried unsuccessfully last year to regulate the online rental of homes and rooms.

The victim’s mother, Sharon Heath, echoed a similar sentiment about her son in an interview with The Boston Herald.

Crawford personally thanked first responders for their diligence at the scene at 8 Needham Rd.

“I am extremely happy with how public safety personnel, both police and fire, responded,” said Crawford. “I want to thank those who put themselves in danger in what was an obviously volatile environment.”

Barrett agreed. “We should always applaud the great work of our first responders,” he said.