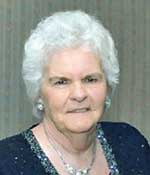 She was born in Melrose on Jan. 28, 1932 to the late Thomas and Helen Sullivan. A life-long Melrose resident, Catherine, with her husband William, raised nine children.

Catherine was a two-time cancer survivor. On Dec. 13, the good Lord reunited her with the love of her life, William J. Mulcahy, who died on Sept. 10, 2014, after a long, courageous battle with Alzheimer’s disease.

Catherine’s pride and joy were her 22 grandchildren, about whom she could talk endlessly. She was grandmother to Allison and Diana Russo; Daniel, Jennifer and Laura Hicks; Kaitlyn and Matthew Mulcahy; Kevin and Colleen Mulcahy; Melanie and Erica Richard; Jacklyn Ward, Catherine and Andrew Mulcahy; Erin and Tommy Mulcahy; Devin and Connor Paquette, and Bryan, Sean, Colin and Kiera Mulcahy.

She treasured her Bay State Road neighbors: Nancy and Herb Schurian, Louise and Bob Toomey and Louise and Jerry McGuinness. She loved passing an occasional summer’s day at the beaches of Revere, Cape Cod and Maine with family and friends.

With husband Bill and their Italian-American Citizens Club friends, Catherine enjoyed multiple cruises to the Caribbean, two trips to Ireland, and twice-yearly bus trips to Atlantic City. Although Catherine loved the thrill of playing the slot machines and the Lottery, the biggest winnings of her life were the nine children she had borne and loved.

Catherine was predeceased by her brother, Franciscan Brother Thomas B. Sullivan, Order of Friars Minor.

Her funeral was held from the Gately Funeral Home, 79 West Foster St., Melrose on Saturday, Dec. 17, at 9 a.m., followed by a Mass of Christian Burial at Most Blessed Sacrament Church, 1155 Main St., Wakefield at 10 a.m.

Burial was at St. Patrick’s Cemetery in Stoneham.

In lieu of flowers, memorial contributions may be made in her name to the Alzheimer’s Association, 480 Pleasant St., Watertown MA 02472. To leave an online message of condolence please visit gatelyfh.com.