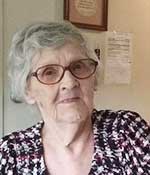 MELROSE — Cecilia (Maguire) Halley, 91, passed away at her home in Melrose on May 15.

Cecilia worked as a young girl as a rope maker at the Charlestown Navy Yard and at Schrafft’s Candy. She married William P. Halley and raised her six children in Charlestown and lived in Charlestown for 50 years.

After the early death of her husband she moved to Rialto, Calif. and lived there for 32 years before moving back east to Melrose 7 years ago.

Cecilia worked as a billing clerk for Blue Cross Blue Shield for many years.

Celia had a great sense of humor, was always quick with the one liners, enjoyed bingo and taking trips to Las Vegas.

She was the wife of the late William P. Halley. Mother of Ruth Kucherer and her husband John of California, Robert Halley and his wife Diana of Malden, Kathleen Halley of California, the late Michael Halley, Diane Kozlowski of Melrose and David Halley of Florida. She was the sister of the late William Maguire, Mary Bean, Bernadette Maguire and Rita Daniels. She is also survived by 9 grandchildren, ten great-grandchildren and several nieces, nephews and grand nieces and grand nephews.

A Mass of Christian Burial will be held at St. Mary Church, Herbert Street, Melrose, on Friday, May 20, at 9 a.m. Relatives and friends are respectfully invited to attend. Burial will be private. In lieu of flowers memorial contributions may be made to St. Jude Children’s Research Hospital, 262 Danny Thomas Pl., Memphis TN 38105 or www.stjude.org.