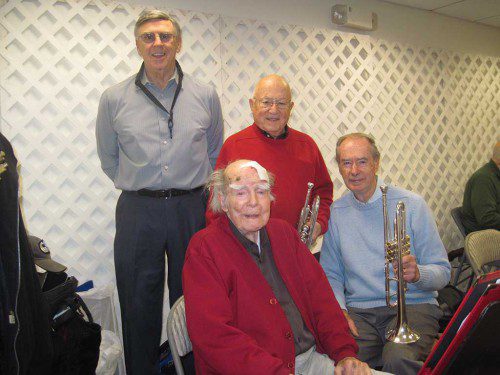 Most people who come to the Lynnfield Senior Center on the second Tuesday of every month might not recognize Frank by name. But they would certainly recognize him as one of the R&R 2000 Big Band members who play all the old standards that couples and singles love to dance to on those Tuesday mornings — standards like “Chanson d’Amour, “Green Eyes” and “If.”

If music brings out the best in people then that includes the seniors who come to listen to the Big Band music at the senior center. Most say they can’t get enough dance floor time.

Frank is not one to rest on his laurels or depend on anyone else to get him to and from where he needs to be. On the mornings he plays a gig somewhere — whether in Lynnfield, Peabody or Beverly — he gets himself washed and dressed and goes out to the driveway to start his Mitsubishi Outlander. Then, off he goes.

Peabody resident and R&R 2000 Band leader Mario Carrabba said that Frank has been playing trumpet with his band for the past 10 years, while Carrabba has been playing both tenor sax and clarinet for 17 years with the group.

“Frank is our consultant. He’s an absolute pleasure,” said Carrabba. “We look at Frank as a good inspiration for us all. He’s also great at improvisation. He’s the man for that.”

According to daughter Diane, Frank’s life history includes serving in the U.S. Army in the South Pacific, a lengthy marriage to her mother Irene before her death in 2004, and a 45-year career as production manager at Sylvania. He keeps up with world news and loves all kinds of music. He developed his musical training with the help of a music teacher in Salem during his youth. “I just can’t remember her name,” he said.

Frank has lived a storied life, indeed, having lived through two world wars, the Korean War, the Vietnam War. He has seen presidents come and go and many societal and cultural changes. In short, Frank has seen it all, and he enjoys countless memories of the good times, many that revolve around his music and his family.

One musical memory revolves around the time he played his trumpet during a steamboat trip through the Deep South.

“He brought his trumpet and played with the on-board band,” said Diane. “And this past season at the Salem Willows concert series the first concert was dedicated to my father.”

“He doesn’t look for praise,” said Diane. “He’s very humble. I don’t think he realizes his true worth.”

Over his musical career, Frank had the pleasure of playing with as many as 60 other Big Bands and music notables such as well-known trumpeter Herb Pomeroy.

Frank is a man of few words and even fewer expectations. Still, if there are a few surprises in store for his 100th, he’ll accept them with grace and gratitude. And if his Big Band just happens to play a rousing “Happy Birthday” to him, he’ll probably join in the fun.

It’s also likely that he’ll do what he’s so often told to do by his fellow musicians — And that’s to “Keep tootin’.”