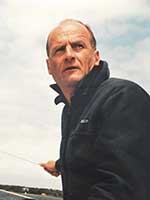 GLOUCESTER — Charles James “Buddy” Classen, 79, of Gloucester, passed away peacefully Oct. 26, in Gloucester.
Buddy was born in Wakefield on Oct. 23, 1937, son of the late John Edward Classen and Emily Burke Classen.
He was a captain in the Wakefield Fire Department and had many fond memories of his times with his friends in the department. After retiring, he worked as an arson investigator and taught classes at the Mass. Fire Academy in Stowe.
Bud was an avid sailor and could often be found on the waters off Gloucester where he made his home with his longtime companion, Jeannette Smith. Buddy loved spending days with his dog walking the beach in Gloucester.
He is survived by his life companion Jeanette Smith, his children Greg Classen, Eric Classen, Heather Classen and daughter in law, Leslii Stevens, three grandchildren and two great-grandchildren; his sisters Mildred Beebe and Emily McLaughlin, plus many nieces and nephews. He was preceded in death by his brother Edward Classen.
A funeral Mass will be held at Most Blessed Sacrament, Wakefield, on Saturday, Nov. 5, at 10 a.m. Burial will take place in mid-November at Forest Glade Cemetery Wakefield.
For online condolences and register book please visit www.pikenewhall.com.
Arrangements are under the Pike-Newhall Funeral Home, 61 Middle St., Gloucester.