Boy harriers have a strong showing in Middlesex League Meet 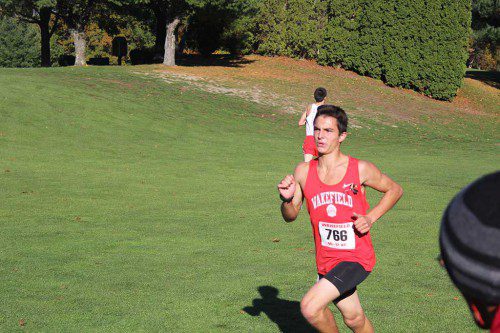 MATT GREATOREX, a junior, captured fifth place in the varsity boys’ race with a time of 12:35 in the Middlesex League Meet on Monday at the Woburn Country Club.

The Warriors were up against Lexington which is a perennial powerhouse year after year and is currently ranked as one of the top large schools in the state. Even though it was Halloween the Warriors were not spooked by the enormous numbers that Lexington had on the starting line of each of the three boys’ races on the day.

The Warriors had one of the best days of the program in many years. The varsity team ran as well as they have all season and proved once again why they are a contender for a state title in the coming weeks. Not only did they give Lexington a run for its money but were ahead of third place Arlington (109 points) by a significant margin by placing three runners in the top 10 and all five scorers in the top 21 of a field of 84 varsity runners.

Matt Greatorex, a junior, ran a strong race placing fifth overall and was the top small school runner with a time of 12:35 over the 2.5 mile course.

Senior captain Adam Roberto and senior Nick McGee had incredible runs as well placing eighth and ninth in just their first time on the Woburn Country Club course with times of 12:48 and 12:49, respectively.

Ryan Sullivan, a senior captain, squeezed into the top 20 with his 19th place finish running a time of 13:07.

Junior Tommy Lucey was right behind Sullivan in 21st place at 13:10 to round out the scoring.

Riley Bracket, a junior, improved a great deal from last year and placed 36th in a time of 13:44. Senior captain Jack Stevens placed 43rd at 13:54.

The JV race was a sight to see and a nice change of pace from the typical Lexington domination. This year the Warriors were very strong placing five runners in the top 10 and capturing the victory from Lexington by two points, 28-30.

It was the first time since 1984 that the JV team grabbed a victory in the historic meet.

Coach Perry Pappas felt Wakefield’s performance shows the great depth that the boys have created through hard work and dedication especially against a Lexington squad known to have the most depth in the league year after year with roster numbers double what the rest of the teams have.

It was impressive to have four of the five top Warriors only in their sophomore year and that only means good things ahead for the program said Pappas.

Sophomore Billy Stevens captured the victory running a fast time of 13:33. Stevens ran the third fastest JV time in the 45 year history of the meet.

Much improved senior Mike Frezza placed sixth in a time of 13:59. Sophomore Casey Brackett placed eighth with a fast clocking of 14:03. Sophomore Derrick Scheeler also moved up well during the race to grab 10th in a time of 14:04 to help the Warriors secure the victory.

The freshman boys’ race also showed great promise for the future as the Warriors placed four boys in the top 20 helping the team place second, also behind Lexington, 30-52.

Tanner Jellison continued his strong freshman campaign and came away with the victory with a time of 6:36 over the 1.25 mile short course. Tanner ran a smart and patient race and gained the win with a strong finishing kick.

Matt Roberto, who has also been strong in big meets this season, placed fifth with a time of 6:50.

David Root continues to improve and placed 12th in a time of 7:04. Jimmy Crump had another consistent race placing 17th in a time of 7:10. Jack Callahan ran well placing 29th in 7:23 to close out the scoring runners.

The Warriors will now head to Wrentham to compete for the Div. 4 Eastern Mass State title on Saturday, Nov. 12.