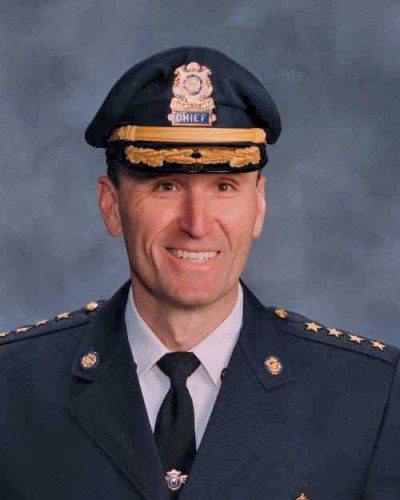 Oct. 27, 2015 will be proud day for Wakefield Police Chief Rick Smith and for the community he has served for nearly 12 years.

In ceremonies that evening in Chicago, Chief Smith will be sworn in as Vice President at Large of the International Association of Chiefs of Police (IACP). He will be one of only two IACP vice presidents at large for the next three years. In that capacity Smith will help to shape the direction of policing, not just in the United States, but worldwide, for years to come.

“I am overwhelmed,” Smith told the Item last week. “I can’t believe that my good fortune has put me in this position of responsibility for furthering policing in the world for the next three years.”

It’s an honor that will cap a long and accomplished career in law enforcement for Smith. Just a few months after his term as IACP vice president ends in October of 2018, Smith will retire as Wakefield’s Police Chief, having reached the legally mandated retirement age of 65.

“I’m a lucky guy,” Smith said. “I’ve had a great career. For all these guys from across this great county to say, ‘We want Rick Smith from Wakefield, Massachusetts to represent our interests on the global scale,’ that’s pretty humbling.”

But Smith is not ready to look back yet. On the contrary, he’s gearing up for the work ahead.

“It’s a great opportunity for me,” Smith says. “It’s going to be a lot of work but I’m up to the challenge. I think I can bring a lot of good stuff back that will certainly help Wakefield – and that’s my goal.”

Smith leaves no doubt that his first priority is Wakefield and he gave that assurance to Town Administrator Stephen P. Maio before deciding to pursue his new role with the IACP.

“I made it perfectly clear that this is my job,” Smith says. “This is my job and my life for the next three years until I have to retire. Nothing is going to interfere with that.”

Maio was happy to give his blessing to Smith’s role as VP of IACP.

Smith recalled how the opportunity came about. He has been a member of IACP ever since he became Chief of Police in Melrose in 1998 and has served on a number of IACP committees over the years. Then, at an event in Orlando, Fla. last year, the president of the IACP asked Smith if he would be interested in running for the open vice president position.

Smith learned that he would have to form a campaign committee and raise money, just like any other political candidate. He would be running against candidates from California, Ohio and Pakistan. Soon, he was traveling around the country seeking support from various state chapters of IACP.

“Almost every weekend last winter – from January to April – I was in a different state,” Smith recalls. He went to Texas and Florida three times each. He travelled to Michigan, Oregon, Wisconsin, Illinois, New Jersey and all of the New England states. He got the endorsements of all of them.

Eventually, realizing they could not beat Smith because he had accumulated so many key endorsements, the other candidates pulled out. The IACP called and told Smith that because there was no longer any competition, there was no need for an election and he would simply be sworn in as vice president at large on Oct. 27.

As vice president at large, Smith will oversee the work of a number of IACP committees, including committees on Community Policing, Victim Services, Juvenile Justice and Child Protection and the Private Sector Liaison Committee.

In working with those committees, Smith said, his role will be to provide oversight and direction on how we incorporate their work into mainstream policing.

“A lot of it is looking at training for police in areas like civil rights,” Smith said, “so that hopefully we’ll never have another Ferguson, Missouri or Baltimore. Community Policing and Juvenile Justice will have an impact on preventing those types of things, so I’m excited about that.”

Smith said that the IACP position will require him to attend quarterly board meetings each year, with a few day trips here and there. But he stresses that the IACP will be picking up the tab for all travel, not the town. He says that the amount of travel involved will not be much different than the professional travel he does now.

Smith says that without the support network he has behind him, he wouldn’t be able to take on this new responsibility.

At their meeting last week, members of the Board of Selectmen offered their support and congratulations.

“This can only help Wakefield,” Chairman Ann Santos said, “to have our chief be one of the vice presidents. You’ve brought best practices to Wakefield and a code of honor among the officers walking the street. This is so well-deserved and a wonderful tribute to Wakefield.”

“The Police Department is in good standing for the long haul,” Selectmen Glynn told Smith. “Thanks for being so dedicated to the community.”

“I’m very proud of you,” she said. “It couldn’t happen to anybody better.”

Maio said that it was a great honor for Smith and also for the town.

“We’re a town of 25,000 and our chief is vice president of the International Association of Chiefs of Police,” Maio said. But he stressed that what really matters is what Smith has brought back to Wakefield.

“We have an accredited Police Department because of the Chief and his staff,” Maio added. “That makes a difference.”

Smith is looking forward to his next three years as Wakefield’s Chief of Police as well as his new role with the IACP.

“I have to retire in May of 2019 by statute,” he says. By then, Smith will have spent almost 45 years in law enforcement.

Smith sees serving as vice president of the IACP as another way to serve the town.

“I’m excited but the bottom line is that it’s good for Wakefield,” Smith says. “I’m humbled that people think I’m up to the job.”