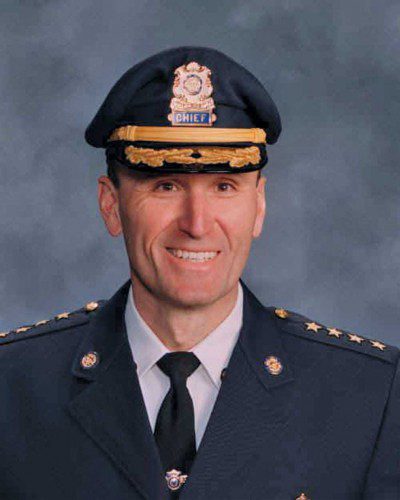 NEW HAVEN, Conn. — Wakefield Police Chief of Police Rick Smith was at Yale University Law School this morning to deliver the keynote address at the National Symposium on Eyewitness Identification Reform.
Eyewitness misidentification is seen as the single greatest contributing cause of wrongful convictions established by DNA nationwide, playing a role in 71 percent of convictions overturned through DNA testing.
Smith, who is also vice president at large of the International Association of Chiefs of Police, was asked to address the impact of eyewitness misidentification from a law enforcement perspective. The June 27-29 symposium was attended by lawyers, judges and law students from across the country.
In addressing the symposium this morning, Smith quoted the words of U.S. Supreme Court Justice William Brennan, who noted that there is “nothing more convincing than a live human being who takes the stand, points a finger at the defendant, and says ‘That’s the one!’”
But Smith pointed out that such compelling evidence can be wrong and errors made by eyewitnesses in identifying offenders have led to a disturbing number of wrongful convictions nationwide.
“To date, 341 prisoners from 37 states have been freed after DNA evidence proved they were convicted for crimes they did not commit,” Smith said. “Alarmingly, over 70 percent of these defendants were convicted after an eyewitness mistakenly identified them as the perpetrator. In other words, faulty identifications by witnesses account for more wrongful convictions than any other cause.”
Most of these exonerated defendants had been serving time for homicides and sex assaults, crimes that frequently yield DNA evidence, Smith told the symposium.
While erroneous convictions ruin the lives of innocent defendants and taint the reputation of the courts and the police, Smith pointed out, there is an another, equally troubling problem: they also leave the true perpetrators on the street to continue offending.
“We know that in about half of the DNA exoneration cases, the DNA that freed those inmates also identified the actual perpetrators,” Smith said. “As you might expect, many of those offenders were up to no good while the wrong man sat in prison. We know that in addition to the crimes for which an innocent person was incarcerated, those criminals raped over 70 women and murdered over 30 other people, all while the wrong people sat behind bars.”
Smith noted that mistaken identifications are not always the fault of the criminal justice system, nor are they the fault of the victim or witness who made the identification.
“Remembering the faces of people we don’t know or even recognizing them but accurately recalling the source of familiarity is a difficult human task,” Smith said. But there are things we can all do to ensure that we safeguard against the misidentification of an innocent person. Additionally, the use of reform protocols by the police can prevent a witness from identifying the wrong person, which can make them ineffective witnesses later at trial.”
Smith told conference attendees that the IACP began looking at ways to address wrongful convictions over a decade ago.
“Clearly everyone wants to see the right person brought to justice and no one wants to be a part of a failed effort that sends the wrong person to prison,” Smith said. “Still, even with the best of intentions, wrongful arrests, prosecutions and convictions occur. And they have a profoundly damaging impact on everyone — from the innocent person convicted, to the victim, the communities at large, law enforcement, prosecutors, defense attorneys, judges and juries. The only person immune to this damage is the actual offender who remains unaccountable and at-large, free to commit new crimes and create new victims.”
To raise attention to this issue, Smith pointed out that the IACP National Law Enforcement Policy Center released a compendium of model policies that could help mitigate wrongful arrest. In 2012, IACP convened a Summit on Wrongful Convictions that brought scientists, practitioners, police chiefs and the Innocence Project together to address and examine the causes of and solutions to wrongful convictions. The result was a report that serves as a roadmap for police chiefs all over the world. The report includes 30 recommendations for making rightful arrests, correcting wrongful arrests, leveraging technology and forensic science and re-examining closed cases.
Smith talked about reforms that have already been implemented in Massachusetts.
“In my own state of Massachusetts, most police departments adopted reform-based policies 10 years ago,” Smith said. “In 2013, our state training agency mandated that every police recruit attending any Massachusetts police academy would receive a half day of training on eyewitness identification. This past year, that agency mandated that every municipal police officer receive a half day of training during the academic year. Through these efforts, we have ensured that every police officer in every city and town was required to complete training.”
Smith maintained that the modernization of eyewitness identification policies and protocols can be easily accomplished by any police chief who wants to do so.
“Training and model policies are readily available,” he said. “The techniques used by the police in this area have a profound effect on victims, witnesses, defendants and on society itself. We should take the opportunity to embrace reform. It is the right thing to do.”
Smith called upon police everywhere to embrace reform and pledged the support of the IACP for chiefs who need assistance.
“Our mission is to protect society’s innocent,” Smith said, “and we shall use every resource at our disposal to accomplish it.”