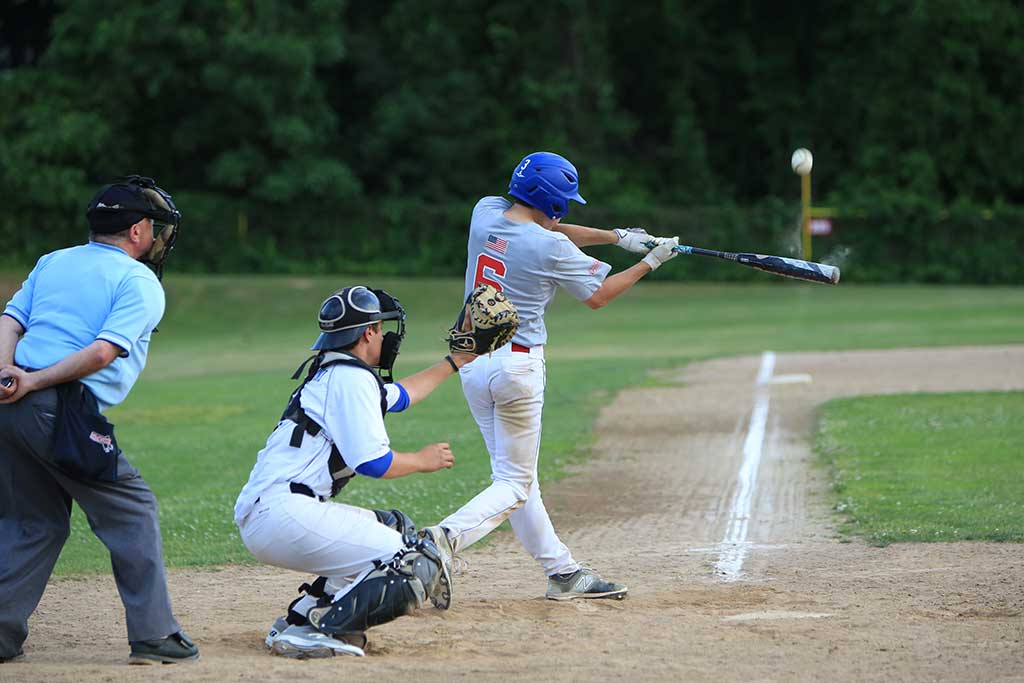 On Saturday the team held its own at home against Sudbury. After trailing 4-2 going into the sixth inning, the Townies pushed across three runs and took the win, 5-4.

Sunday the Townies went on the road to Wellesley and the bats came alive, knocking in 12 runs en route to a 12-7 win.

Entering Tuesday with a 3-1 record, a game with Reading was slated to provide a test for Wakefield. As it proved, Reading was no match for the hot bats of the Townies as they prevailed by a 16-4 score at Walsh Field.

The game ended following somewhat comical circumstances when amidst a sixth inning rally that saw eight runs come in for Wakefield to extend the lead to 12, the sprinklers came on while Reading changed pitchers. The combination of time of the game and score coupled with the ever encroaching darkness, the umpires decided to call the game for Wakefield, with the final score of 16-4 a mercy-rule win for the Townies.

“The last three games have been real solid ‘D’ and pretty good pitching,” Manager Butch Coughlin said after the win Tuesday. “Everyone contributed. There wasn’t any one kid who was a superstar, it was by committee.”

On Tuesday, Kevin DeLeary got the start on the hill against Reading and went the first three innings surrendering the four runs Reading scored.

DeLeary got the opponents to go quietly in order in the first inning with a couple of pop flies and a ground out.

In Wakefield’s half of the first the team put up a crooked number, scoring two times while recording two hits and earning two walks.

Tyler Pugsley led off with a walk but was thrown out trying to steal second base. Tim Hurley was retired on a foul pop up that the third baseman made a tremendous diving catch to get the out. With nobody on and two outs, DeLeary walked and stole second base. He scored when Jake Nardone singled to center to pick up the RBI. Nardone scored when the next batter, Robert Shaw, singled and the ball was mishandled in the outfield. Shaw advanced to second, but the inning would end when the next batter grounded back to the pitcher.

Reading got the two runs it surrendered back, and added another to take a 3-2 lead in its half of the second on two walks and a single.

Finding themselves behind, the Townies added three runs of their own in the bottom of the second. Once again, Wakefield did its damage with two outs as Mike Lucey and Cole Kraus popped out to begin the inning with two quick outs.

Jordan Fauci was then hit by a pitch, Travis Marsh walked, and both scored on a two-RBI single by Pugsley. Pugsley scored when Hurley doubled, but the inning ended as Hurley was caught trying to steal third a few pitches later.

DeLeary struggled in the third giving up two straight hits to start the inning. A fly ball to center field got the Townies their first out but a third hit in the inning brought a run in for Reading. DeLeary got the next batter to ground out and the inning ended with a base-running blunder that ended the Reading threat.

Heading into the bottom of the third, Wakefield held a 5-4 lead but was unable to extend it in the inning as it left two base runners on.

Kraus came on to pitch for Wakefield in the top half of the fourth inning and he shut the Reading bats down, striking out two while walking just one and not surrendering a run.

That allowed the bats to go to work in the Wakefield fourth as Kraus helped himself out with a leadoff double to deep left field. Fauci followed with a single to move Kraus up 90 feet, then Colin Jaena knocked him in with an RBI base hit to right. The inning came to an abrupt end, when the order cycled back to the top. Pugsley struck out swinging, then Hurley singled. But DeLeary popped to the pitcher and Hurley was caught trying to steal second to retire the side.

Reading couldn’t manage to get anything going off Kraus in the fifth and went down meekly in order. The Townies had a pair of base runners on with one out in its half of the fifth following a walk and an error by the left fielder. Wakefield scored two runs but a double play ended the Wakefield scoring chance before it could add any more runs to its lead.

Reading sent only three batters to the plate in the top of the sixth with Kraus walking one, striking out one, getting a ground out and catcher Brendan Coughlin throwing out a base runner trying to steal third to end the half inning.

With an 8-4 lead heading into the last of the sixth, the end of the game was in sight but nobody really knew how close it was.

Perhaps Reading left its pitcher in hanging around for too long but there was never anyone warming up for the visitors prior to the sixth. Wakefield went off and rallied plating eight runs on 10 straight hits. Lucey delivered the fatal blow, a ringing triple to clear the bases and make the score 16-4.

Reading’s coach finally decided to pull his pitcher but, as play was set to resume, the sprinklers came on. Citing time of the game, score and time of day the umpires enacted the “mercy rule” and declared Wakefield the winner.

Next time out the Townies take on Cambridge at Sullivan Park on Thursday at 5:45 p.m.