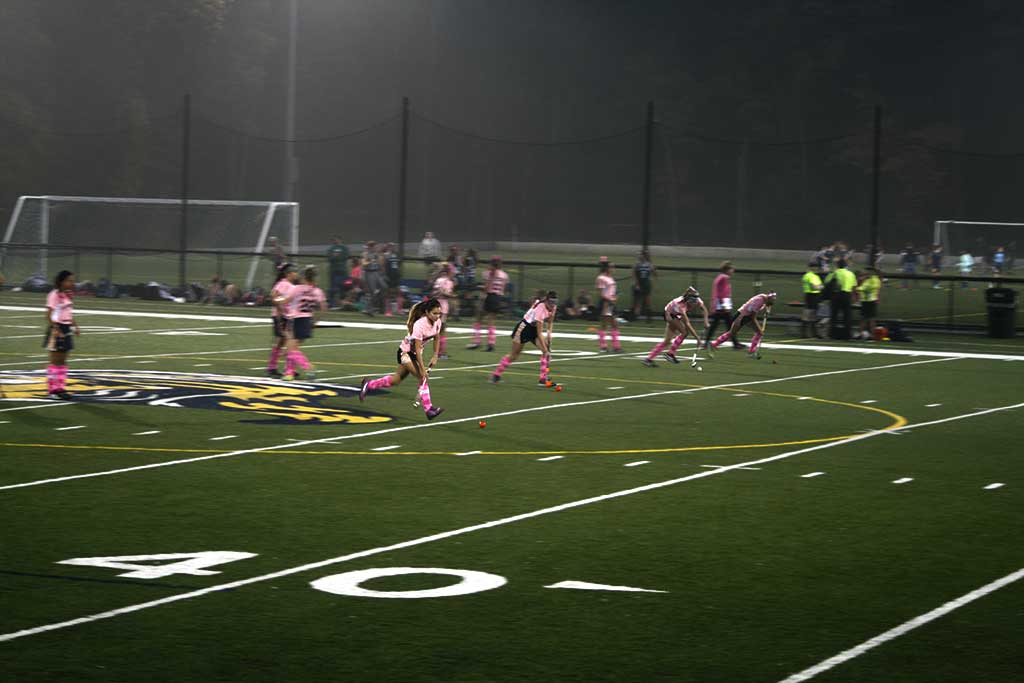 DECKED OUT in pink accessories, the varsity field hockey team stood out even as a dense fog enveloped the team during the Play4TheCure game against Pentucket. The 2-1 win gave coach Mamie Reardon her 300th career victory. (Maria Terris Photo)

LYNNFIELD — Decked out in pink accessories (and even some pink hair), the Lady Pioneers field hockey team was triumphant in the team’s Play4TheCure game to benefit breast cancer research last Tuesday, Oct. 18.

Challenging the Pentucket Sachems, the Pioneers pulled off their 2-1 victory at Pioneer Stadium to tally the team’s ninth victory of the season.

“Lilli Patterson scored both goals for us, one in the first half and one in the second half,” commented head coach Mamie Reardon after the game.

With the score knotted at 1-1 to the Sachems, Reardon said the game’s outcome “was on the line” when the senior tri-captain scored a second time in the second half with the goal that would prove to be the game-winner.

In addition to the great play of Patterson, Reardon said Min Oliveri and Abby Buckley both had exceptional games and she was pleased that “our forwards played aggressively.”

The victory not only ensured that Lynnfield would remain tied with Masconomet for first place in the Cape Ann League large division standings at 9-2-2, it also marked the 300th career victory for Coach Reardon and the 10th overall win in 2016 for the Pioneers (10-2-3).

One of the parents caught wind of the possibility of this milestone being achieved at the Play4TheCure game and arranged to have a bouquet of flowers on hand for the girls to present to Coach Reardon to mark the occasion.

“It is really a tribute to the 34 teams I had in the past that got us to the 300th mark and I couldn’t be happier that this team was the team to get us there,” Reardon told the Villager.

“Kudos to all the girls on all the teams in the past, and of course to this present team,” she added.

The first meeting between the Masconomet Chieftains and the Lynnfield Pioneers in early September ended in a 1-1 tie, and both teams have been playing tag in the league standings all season long.

But after 60 minutes of play, the two evenly matched teams still remained deadlocked in another 1-1 tie as both teams held on to first place in the league standings at 9-2-3.

Reardon said competing against the Chieftains on their grass field “was really tough.” The Chieftains struck first to take a 1-0 lead.

Not content to leave Masconomet with a loss, freshman Lilly Rothwell stepped up. “She scored to make it 1-1,” Reardon said of the clutch play. It was the fourth tie of the season for Lynnfield, giving the team an overall record of 10-2-4.

Friday night’s torrential rain postponed the Newburyport game until Monday night Oct. 24 (after press time). Lynnfield’s 1-0 defeat of the Clippers back on Sept. 16 started a five-game win streak for the Pioneers.

Lynnfield will close out the regular season at home against rival North Reading today (Wednesday, Oct. 26) at 6:30 p.m. The Senior Night game will be played at Pioneer Stadium. Lynnfield leads the series against their rivals 1-0.

“We had a fantastic Think Pink Bake sale with an amazing raffle table set up all to benefit Play4theCure for the National Foundation for Cancer Research (NFCR),” said Mei Patterson, one of the parent organizers of the season-long fundraiser. “We really couldn’t ask for more; wins for both teams and a phenomenal turnout!”

In addition to the varsity team’s 2-1 victory over Pentucket on Oct. 18 and Coach Reardon’s 300th career victory, their JV counterparts shut out the Sachems 1-0.

“It was a great way to end a fabulous event. Between the raffles and bake sale the evening brought in over $3,000! This alone was more than last year’s $2,650,” Patterson said.

The field hockey players began raising funds for this event in mid-September when they launched their Scare Away Cancer campaign, decorating lawns throughout town with dozens of miniature scarecrows, including one dressed in pink, with suggested donations of $20 per house. “They ‘spooked’ over 170 homes in Lynnfield! They also hosted a lunch fundraiser at Chipotle in Reading,” Patterson said.

“Both the spooking and Play4theCure game were a tremendous success thanks to this generosity of this community. We have received so many notes on how much the kids enjoyed being spooked. We even heard from a few breast cancer survivors who were touched by the fundraiser and passed along to a fellow survivor,” Patterson said.

The last homes to be spooked were done this past Sunday night.

“We are all really very proud of the team. It has been a lot of work for the girls and especially for the seniors, who were relied upon to be the drivers. With homework and preparing their college applications, it was a lot for them to take on during an important time for all of them. Rain or shine they went without any complaints. They are a special group of hard-working girls. They have shown what a difference one team of hardworking kids can make,” Patterson said.