Melrose battles back in 4th to top Stoneham, 15-14 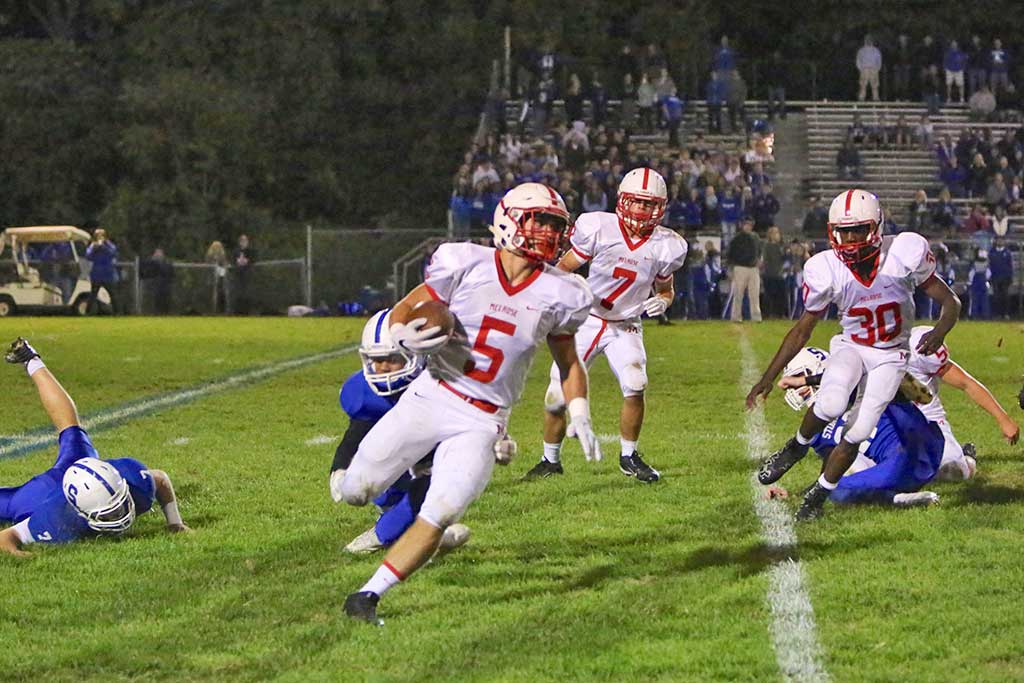 STONEHAM  –  A come-from-behind, fourth quarter rally by the Melrose Red Raider resulted in a much needed 15-14 win over league rival Stoneham last Friday night in a memorable, down-to-the-wire thriller that improved Melrose to 4-2 and 3-1 in the league.

The Red Raiders erased a 14 point deficit thanks to two fourth quarter touchdowns by Mike Pedrini (2 TDs, 125 yards on 15 carries), some good luck and a gutsy point after call by Melrose head coach Tim Morris.

Melrose was trailing 14-0 with less than seven minutes in the game when Pedrini opened things up on a 50 yard dash and 6 yard TD to make it a 14-7 game with a good Chris Cusolito extra point. That play had been set up by what appeared to be an onside kick or short kick off by the Spartans (4-2) that was recovered by Melrose on the 50. The Raiders only required two plays for Pedrini to find the end zone and reverse fortune. Meanwhile, a game winning two-point conversion from Melrose QB Jack Mays to Pedrini into the end zone saved the day for Melrose after their second touchdown of the game with 2:32 remaining.

“A big theme of ours, regardless of the score, is to play four quarters,” said coach Morris after the game. “Our guys believe that they are never out of a game as long as they keep playing hard and when we needed to feed someone the ball at the end, it was John Wayne-time for Mike Pedrini.”

Stoneham was in command in the first half, finding the end zone on their first possession thanks to a TD run from Christos Argyropoulos. Later in the fourth the Spartans killed the clock on a 90 yard drive that culminated in a nine-yard touchdown pass from Stoneham QB Tre Pignone to Tim Russell. A good kick made it a 14-0 game.

After Pedrini struck the first time in the fourth stanza, the Spartans’ night went from bad to worse when they fumbled on the Stoneham 40 yard line, handing the ball back to Melrose as the two minute warning neared. Pedrini was back in command, rushing for 34 yards on a series of handoffs that brought Melrose to the six yard line. He found the end zone on first and goal and cut the Stoneham lead to 14-13 with 2:32 left.

Melrose initially lined up to kick the point after, but called a time out and returned its offense to go for the win. Mays handed off to Pedrini, who cut left into the end zone to give Melrose their first lead and ultimate winning score of 15-14.

“Sometimes you get thinking, we came all the way back and I am putting a freshman kicker out there and he hasn’t done it a lot, so what the heck, let’s just give it to the beast again and punch it in,” Morris said.

Melrose defense did their job to wrap up the game, with a series of sacks and forcing an incomplete pass from Pignone on fourth down to end the game, to the jubilation of Melrose players and fans.

“It feels good obviously,” said Morris. “We didn’t get anything going offensively until six minutes in the game really, but Stoneham is tough.”

The win keeps Melrose’s chances of clinching a share of the league title alive. Neighbors to the north, Wakefield, earned a share of the Freedom title by beating Burlington 22-12.

Melrose will host Woburn this evening at 7 p.m. at Fred Green field, then will keep one eye on playoffs. Stay tuned.