Melrose clinches with 1-0 win over Wilmington 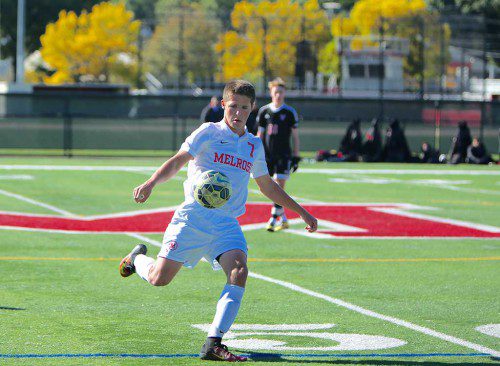 MELROSE — The joyride continues for the Melrose High Red Raider soccer team who qualified for post season with a 1-0 victory over Burlington on the road on Tuesday, their first playoff run in nearly four years. Melrose remains a remarkable 6-0-1 in the Middlesex Freedom League after a recent 1-0 win over Wilmington. For coach Dean Serino’s varsity team, it’s smooth sailing.

“They’ve been playing excellent, this has been a great year. And tonight was a big win against a tough team,” says Serino. “At the start of the season I told our players that they control their destiny and this team has not looked back.”

Melrose relied once again on their stellar defense, including another shutout at the net by Jared Dowell, a player his coach calls, “an invested, team-first player.” Dowell has been backed up at the net by Mike Dreske. “They push each other,” says the coach.

On Tuesday, Melrose played two different halves, including a quiet first one. “We made some adjustments at halftime and saw some amazing efforts by Nick Cordeau and Dylan Vienot. And Patrick Donahue is one of our best defenders’s who has made a huge difference. Will Pzegeo also had a good game. Burlington is a tough team but we played well.”

Melrose found the net thanks to a goal from Owen Thorsteinsson on an assist by Cam Howland. Offensively, Sava Vlajkovic played strong as well.

Last week, Melrose pulled off another key league win with a 1-0 victory over Wilmington courtesy of a goal from Joe Connolly (Mike Dreske assist). “Joe is just one of the best athletes on the team,” says his coach. “It was a big goal.”

It’s been a collaborative effort from Melrose all season and they’ve relied on a tough defense that has limited opponents to an anemic number of goals, thanks in part to Nick Cordeau and Pete Wiesen. “Nick is an amazing athlete, he’s driven and confident. And Pete finds a spot right in front of Nick. He’s tough fast and has a great mentality. ”

Whatever Melrose doing is working. Says Serino, “This team believes in each other, they love the game and have outstanding chemistry. A lot of things have to go right during a season and we’ve been lucky.”

As the regular season winds down, there remains a very real possibility of Melrose clinching the league, with Watertown being their biggest threat to that. And it’s not just the varsity team who is succeeding; both their JV and freshmen teams are coming up big, which means the future is bright for MHS soccer.

As for what the post season holds for Melrose? “We still have things to prove,” says the coach. “We’re not really even thinking playoffs right now. We want to close out the next four games of the season strong and when the dust settles, we will see where we are at.”