Conservation land sale and swap at Kelly Jeep on warrant 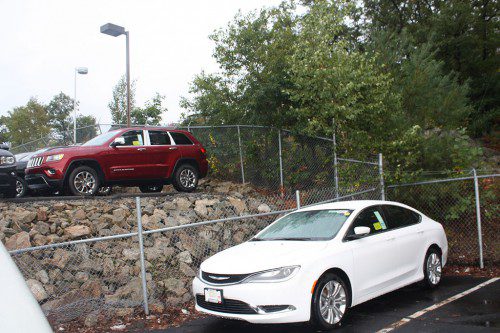 THE PARKING LOT elevation between two sections of the Kelly Jeep Chrysler site could be lowered significantly, decreasing the height of the parking lot lights too, as part of the site redevelopment, which includes the sale of a small parcel of conservation land to the dealership. The town would also get an equal size piece of conservation land in the exchange elsewhere on the site plus an access easement to the Bow Ridge Conservation Area. (Maureen Doherty Photo)

LYNNFIELD — The selectmen have recommended passage of a warrant article proposed by Kelly Jeep-Chrysler to sell a small parcel of conservation land historically used for parking while also providing the town with an equal size parcel of land that is truly conservation land.
The board closed the October Town Meeting warrant last Friday and 18 articles will be considered by the voters at October Town Meeting on Monday, Oct. 19. The meeting will be held at 7:30 p.m. in the LMS auditorium. A quorum of 175 is required.
If the land swap and sale under Article 13 is successfully passed it would be the first step in a multistep process for the site at 353-385 Broadway, which would include petitioning the state legislature allowing the town to sell conservation land and subsequently put the request out to bid.
The Conservation Commission has already declared the land surplus and is in favor of the sale. It would be sold for at least $170,000 and those funds would be conveyed to the ConCom. Kelly would also provide an equal-size parcel of conservation land on the adjacent Kelly Nissan site as part of the deal to replace the lost square footage.
By selling the 9,100 square foot parcel, the town would also gain a permanent access easement to the remaining portion landlocked 2.29 acre conservation site, which serves as an access point to the Bow Ridge Conservation Area. Kelly already uses the spaces under an agreement with the ConCom and provides access to the site to a group of mountain bikers. This deal would make that arrangement permanent for townspeople to access the site.
When this was first proposed to the selectmen last month they were unsure of the ramifications of the plan and requested a site visit to better understand the potential impact to the land and the abutting residential neighborhoods.
The site visit took place last Wednesday, Sept. 30 and Kelly invited the Canterbury Road neighbors by mail. Also attending were Selectmen Chairman Phil Crawford and Selectman Chris Barrett as well as members of the ConCom and Planning Board and Canterbury Road resident Heather Keane.
“It was nice to have a little idea of the topography of the land because it certainly isn’t like what it is on a flat piece of paper. It makes a lot of sense once you look at it,” Crawford said.
“I don’t know how everybody else felt about it. There is $170,000 going to the ConCom and they are going to swap the land in addition to paying for this land,” Crawford said.
During the site visit, Kelly, as well as his attorney and his construction supervisor explained how this piece of land plus some land obtained from the Lynnfield Water District would enable them to ultimately lower the grade of the sloping property significantly.
Kelly pointed out that the site includes several parcels acquired at different times and he is attempting to make it one cohesive campus which will improve the internal parking lot circulation as well as the safety of the lot and allow him to replace the existing Jeep building with a modern showroom.
The former Big Dog restaurant property that is now included in the campus has a mounded septic system that is no longer needed, Kelly said. He has spent the past four years negotiating to get all of his properties tied into the sewer system on Route 1 and off septic.
The lot has several tiered parking lots supported by retaining walls and the site redevelopment would include lowering these lots by several feet — depending on how much ledge they encounter. Doing so would lower the parking lot lights, further reducing the impact on any abutting properties.
In between Kelly’s site and Canterbury Road is another lot owned by Herb Chambers that is used for parking.
Selectman Tom Terranova said, “It seems to make sense because by allowing this swap they will actually lower the grade, which means lowering the level of the lights, which would be a miracle for anybody from Canterbury to even see those lights. So this seems to be no effect on the people of Lynnfield.”
Abutter Heather Keane of 23 Canterbury Rd. said, “Mr. Kelly seemed very cooperative too. I don’t have any issue. He went above and beyond as far as I am concerned. He sent out letters to everyone in Canterbury. Yes, I was the only one that attended, but I think it was in good faith and I think he did a good job.”
Selectman Chris Barrett agreed. The selectmen voted 3-0 to recommend passage of Article 13.