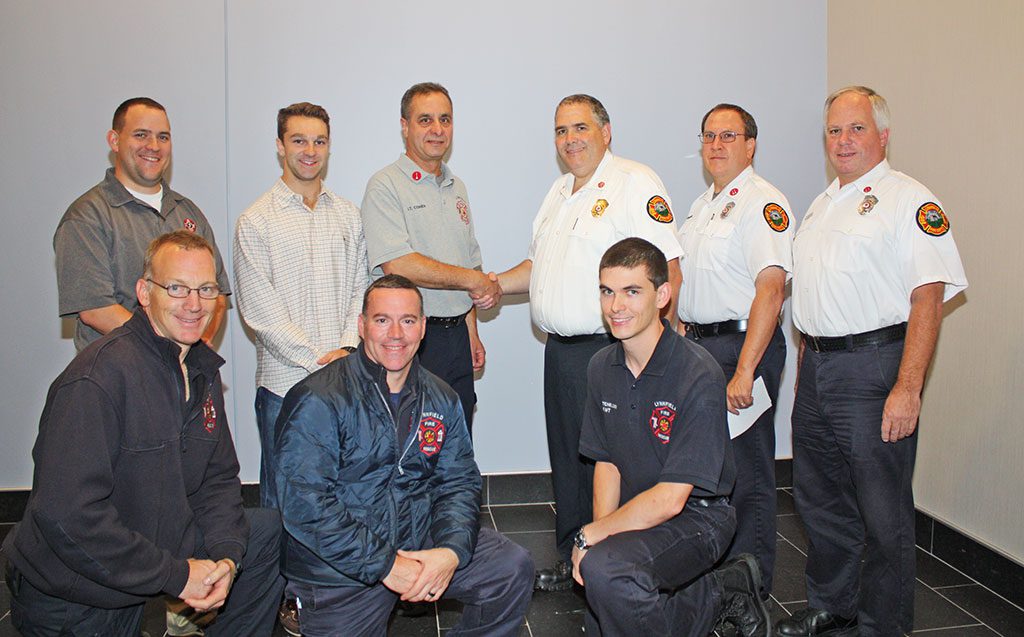 LYNNFIELD — The heroic actions of an off-duty Lynnfield call firefighter saved the life of a diver in distress recently off Pebble Beach in Rockport.

Lieutenant Ted Cohen was on shore when he observed a diver in distress 40 to 60 yards off shore calling for help. He immediately instructed the people he was with to call 9-1-1, grabbed his gear, ran into the ocean and swam out to the diver to bring him ashore safely.

As it turned out, the man’s suit had torn and he was taking on water, which had caused his distress.

Cohen was recognized at Monday night’s Selectmen’s meeting with a letter of commendation from Rockport’s Chief of Police as well as a proclamation presented by the Lynnfield selectmen for his quick actions on Saturday morning, Sept. 5 in saving the man’s life.

“Too often the great work of first responders goes unnoticed. Lieutenant Cohen’s actions are deserving of recognition and therefore I want to commend him for his life saving efforts and assistance in ensuring the safety of the Rockport community during this incident,” wrote Rockport Police Chief John Horvath in a letter to Lynnfield Fire Chief Mark Tetreault.

A group of firefighters, along with Chief Tetreault, attended Monday’s meeting to support their colleague and Cohen received several rounds of applause from the large audience in attendance at Al Merritt Center at MarketStreet.

“When this happened, Ted came into my office and said, ‘Yeah, I just wanted to let you know about this thing. It wasn’t a big deal, but in case you heard something about.’ So, naturally, I knew it was more than Ted was probably letting on,” Tetreault told the selectmen.

“I don’t know if any of you are swimmers but 40 to 60 yards in open ocean is quite a swim,” Tetreault said, adding that Cohen “does a great job for Lynnfield and he is ready to spring to action when necessary.”

In an interview with the Villager after the presentation, Cohen recalled that he had been in between dives for his open water dive certification class at Pebble Beach with Undersea Divers of Beverly when he spotted a diver in distress.

“I was actually on the road talking to a couple from Rhode Island when I noticed a lone diver from another group swimming in from approximately 40 to 60 yards offshore. He was in distress calling for help,” he said.

Cohen asked the couple to call 9-1-1.”Then I ran in, got my mask and fins and snorkel and swam out to him,” he said. “I actually threw my fins away because I wasn’t going to be able use them.” It was quicker for him to just run into the water.

Cohen recalled that his only thought at the time was “just getting there before he went under. He was definitely in distress,” he said of the scuba diver, who was in full gear.

“I swam out to him, grabbed control of him, inflated his BCD (buoyancy compensator), told him he was safe and I was going to pull him in,” he said.

Cohen also thought to ask the diver about his diving partner. The man said his friend was “still getting lobsters and I asked if he was safe and he said yes.”

By the time Cohen had brought the man to shore a couple of his classmates had arrived. Cohen told them to let their instructors know everything was okay. At the time the rescue was taking place their instructors had been on a dive with the other half of their class. “I didn’t want them to poke their head up and see all the fire personnel and fire apparatus,” he said.

Meanwhile, Cohen called Rockport’s emergency dispatch to give them an update. “We didn’t need boats and harbormasters. I told them the distressed diver was safe and they were still sending the ambulance and a police car, which was perfect,” he said.

When they helped the diver out of his suit and drained the water out of it they found the tear near his collar. The diver was wearing what is known as a drysuit, which is not suppose to take on water. “I never heard of it happening. Drysuits are very expensive and they are really nice equipment,” he said. “A wetsuit is different. That actually has water between you and the wetsuit and your body warms it up. A drysuit is suppose to stay dry,” he said.

Ironically, Cohen had just gone through the distressed diver training portion of their course with Undersea Divers a week prior to this incident. All that training paid off and the day after the real-life rescue Cohen took that certification test. Diving is a hobby he had done just out of high school but had given it up for a number of years and recently decided to become re-certified.

He never did get the name of the man he rescued. “He thanked me,” said Cohen, who has been a call firefighter for nearly 14 years.