COPsync911 will provide direct link between schools, police in emergencies 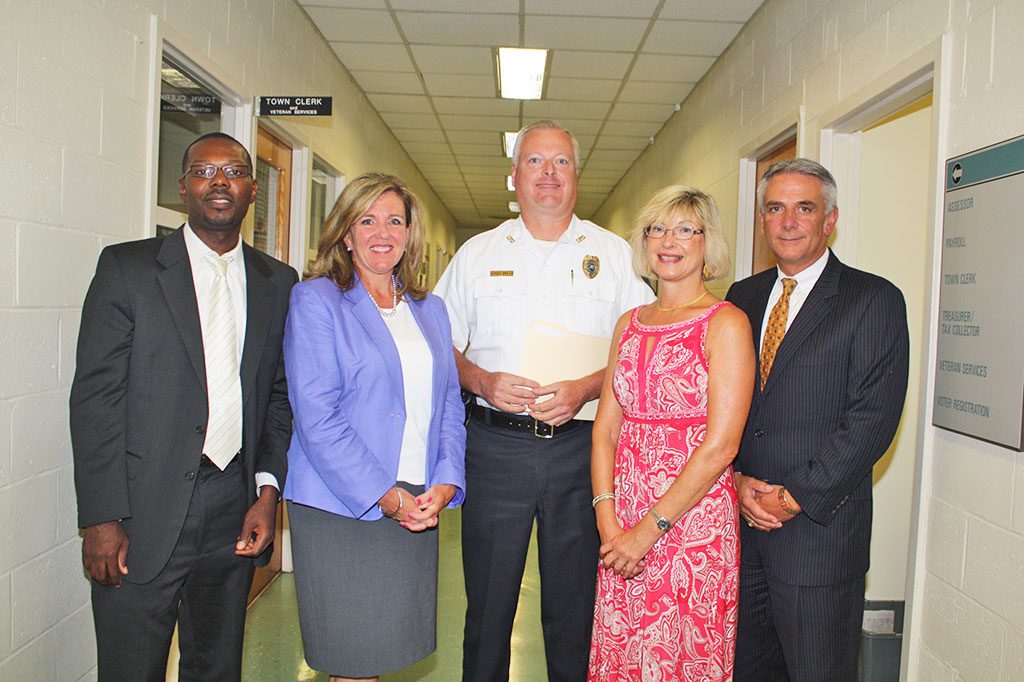 By DAN TOMASELLO and MAUREEN DOHERTY

LYNNFIELD — The school system will soon have a brand new security system thanks to a collaborative effort by the police department, school department and three local banks.

Police Chief David Breen and Superintendent of Schools Jane Tremblay have been working during the past year to improve communication and collaboration between the school and police departments. Breen informed the School Committee recently and the Board of Selectmen last week that their goal is to “improve the way we provide safety and security in the schools.”

Breen recently met with Saugus Police Chief Domenic DiMella about the COPsync911 program, which was successfully launched in that community. The program, which is also used by Peabody, Danvers, Topsfield and Middleton, among others, enables improved communication between police and school departments during emergencies by providing law enforcement personnel with the latest, most powerful and innovative technology solutions in real time.

The police chief said emergency situations are traditionally “very chaotic” and sometimes it “takes awhile” for police to be notified about a situation that could be dangerous. He said the COPsync911 program is designed to make sure that does not happen.

“This allows us to get information in real time, which is critical,” said Breen.

Breen said school and police officials believe acquiring the new technology is critical to ensuring the safety of local children and staff, but he noted discussions about the COPsync911 program took place after budget season ended. Subsequently, three banks, The Savings Bank, Wakefield Co-Operative Bank and Everett Co-Operative Bank, agreed to step up and fund the COPsync911 program rather than have the schools wait until the next fiscal year.

“I think we can offer a better delivery of services to not only protect the students, but the staff and visitors to the schools as well,” said Breen.

“They were so generous to us,” said Tremblay. “When we sat down with the two of them, they were very excited about this initiative. I want to applaud them for their commitment to keeping our kids and our faculty safe.”

The Savings Bank took the lead role in funding the software program and its installation, which will cost about $8,500 at the discounted rate she and Breen worked out with the Danvers-based company. Wakefield Co-Op donated $1,000 and the Everett Co-Op donated an unspecified amount.

Tremblay said she expects the COPsync911 program will be launched in mid to late October. Breen said he will need to establish protocols with area police departments and the State Police before the program is implemented. Tremblay added that faculty members will be trained as well.

Flanagan explained that the program is an alert notification system that seeks to improve communication and coordination between school and police departments.

“What we want to do is bridge the gap between the schools and law enforcement,” said Flanagan. “The mission of COPsync911 is to reduce law enforcement response time because we know that by getting officers on the scene much quicker than we do today, we can mitigate those situations and neutralize them much quicker.”

Flanagan said the software application, which is accessible via computers and mobile devices, will be based at the police department and police officers will have access to the COPsync911 program in their cruisers. He also said police officers’ cell phone numbers will be “plugged” into the network, which would allow them to receive text message alerts during an emergency situation.

Additionally, Flanagan said teachers and school administrators will have access to COPsync911 but students will not. School employees would simply click on the program’s icon or use its mobile device app, which will notify the police department immediately of an emergency incident, he said.

Teachers could cancel the alert “at any point in time,” he added. COPsync911 also allows teachers to stay in contact with law enforcement during emergency situations.

Flanagan said COPsync911 notifies police officers which school is in an emergency situation, including important details such as from which classroom in the building the notification originated.

“What makes COPsync911 so powerful is we are sending information to law enforcement officers in a 15-second window compared to the two- to four-minute window on average nationwide,” said Flanagan. “It’s much quicker than picking up our cell phones because in 15 seconds or less, this alert is going out and the cavalry is coming.”

Additionally, Flanagan said teachers and staff will be able to use COPsync911 to “communicate from the classroom out.”

“We recognize throughout the country the biggest challenge facing us with school safety is the inability to communicate from the classroom out,” said Flanagan. “But this platform will allow a teacher to provide a description about the assailant or what the situation may be.”

Flanagan noted COPsync911 allows area police departments and law enforcement agencies to be notified as well. He also said the program contains information about each schools’ floor plans, so local police can get on the scene more quickly and develop a plan to enter the school.

The COPsync911 representative recommended school officials make sure “key administration and faculty” members have access to the program.

“For the obvious reason, we don’t want this pushed onto everybody,” said Flanagan. “But we recommend as an organization that maybe you develop a group of six to 12 individuals, depending on a school’s size, to receive these alerts.”

Flanagan said COPsync911 can also be used in lockdown situations, such as if police are chasing a bank robbery suspect in town.

Tremblay noted a teacher in Saugus accidentally activated COPsync911 recently. This incident provided a beneficial training opportunity for the Saugus police, Breen said, because they proved they were able to arrive at the school “in less than two minutes.”

Flanagan said there have been very few false-activations in both Massachusetts and New Hampshire.

“I can count them on one hand,” said Flanagan.

“I hope we never have to use this technology,” said Cleary.

At the Sept. 9 Selectmen’s meeting, Breen said this system will serve as a “force multiplier” for the town because the alerts are sent to the five closest police officers in the vicinity of an incident and many of the towns contiguous to Lynnfield already have the program or are considering purchasing it. The State Police barracks in Danvers is also linked to the system, he said.

“We are extremely pleased to announce that The Savings Bank has paid the sum necessary for us to purchase this for the 2015-16 school year,” Breen said.

The selectmen were unanimous in their support of the efforts made by Tremblay and Breen to bring this technology from the Danvers-based company into the community and voted to accept the financial donations that made it a reality.

Selectmen Chairman Phil Crawford thanked Breen and Tremblay for pursuing what he described as “a very powerful system.”

“You need that cooperation with other communities to make it work and I believe this is a great asset for the schools and for the rest of the town,” Crawford said.

Selectman Tom Terranova agreed that “it’s a great idea,” adding that he found the material on the company’s website to be “pretty interesting.”

Terranova asked Breen how much the program would cost if the town were to purchase it without the donations. Breen said Flanagan offered them an extremely good deal at a reduced price of $8,500.

“We received a price initially that would have required us to put it out to bid. We asked them to sharpen their pencils and they did,” Breen said.

Town Administrator Jim Boudreau explained that “the installation of the software and the training is all part of the $8,500 and then there’s an annual maintenance fee after that.”

“It’s a tremendous investment in our students’ safety. When I was on the School Committee we made safety one of our focuses,” commented Selectman Chris Barrett as he thanked all involved for their initiative. “This is another tool in this day and age that we need, so this is an absolute no-brainer,” he said.