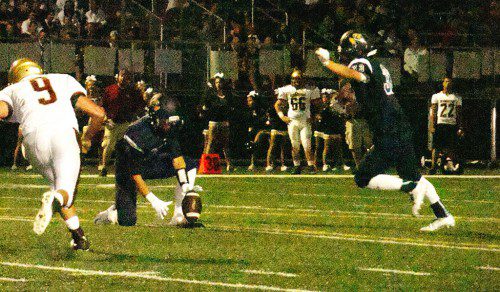 LYNNFIELD — The Newburyport Clippers had to be feeling pretty good at the end of the first quarter of Friday night’s opener at Pioneer Stadium. They were in a 0-0 tie with the three-time defending league champion Pioneers, forcing a turnover on Lynnfield’s opening play and holding the home team to one first down and 35 yards of offense. Offensively, the Clippers broke a few runs and were holding their own against the bigger Pioneers.

Then the roof caved in on them.

The Pioneers shook off the first game cobwebs and scored on their next five possessions to build a 31-0 lead. During a 12-minute stretch from the beginning of the second quarter to a minute into the third, the Pioneers exploded for 323 yards, 12 first downs, four touchdowns, and a field goal. During the onslaught, the Clippers ran nine plays for a net six yards. The Clippers hardly knew what hit them as the Pioneers rolled to a 33-6 win.

“It was a good win,” said Pioneer head coach Neal Weidman. “We were a little jittery in the beginning but we played really well after that first quarter. The first one is always the toughest.” 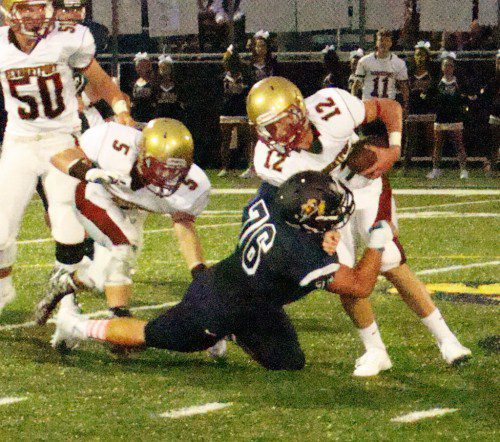 Amidst the explosion, senior Dan Bronshvayg put his name in the LHS record book again by booting his 76th PAT after the Pioneers’ first TD. That breaks the tie with Steve Ullian who had 75 from 2008-10. Bronshvayg also owns the single season PAT record with 47.

The first team defense completely smothered the Clippers, shutting them out and holding them to 65 yards rushing and a net minus-29 yards passing on one completion. A dominating Pioneer front seven harassed the Clippers’ quarterbacks all night, sacking them five times, three by captain CJ Finn, and one each by captain Spencer Balian and Evan Battaglia.

The Pioneers’ offense had an inauspicious beginning to the season when captain Drew McCarthy was stripped on their first play from scrimmage and the Clippers recovered. The speedy running back more than made up for the miscue, later scoring from seven and eight yards out for the Pioneers’ first two touchdowns of the season. He carried 12 times for 82 yards.

After a skittish first quarter, the Pioneers’ offense quickly ignited. Quarterback Jake McHugh jump started things by taking advantage of his two big tight ends. He hit Finn for 31 yards on the first play of the second quarter. Two plays later he found captain Drew Balestrieri for 18 yards. Three plays later, McCarthy was in the end zone to start the Pioneer deluge.

“That got us going,” Weidman said of the two tight end set. “In the past, we’ve gone double tight and teams would just play the run, but now we have a real pass game threat with the two of them in there.”

McHugh sparkled in his debut as starting quarterback, completing 11 of 16 for 220 yards and a touchdown. He also carried four times for 29 yards. His favorite target was Louis Ellis who also shined, hauling in six passes for 112 yards and a score.

After McCarthy made it 14-0 midway in the second period, McHugh and Ellis started their aerial show. Ellis’ 19-yard catch got the drive going and four plays later he finished it when McHugh hit him for a 36-yard TD strike. The duo went to work again on the Pioneers’ next drive, hooking up three times for 41 yards. The last catch in traffic with seconds on the clock set up a 36-yard field goal by Bronshvayg to give Lynnfield a 24-0 halftime lead.

“He’s got really good hands,” Weidman said of Ellis. “The one he set up for the field goal was a great catch. He was strong with the ball, took a hit, and held on.”

The Pioneers picked up where they left off to start the second half. Battaglia’s 85-yard kick return was called back on a hold, but the setback was temporary. McHugh hit Esaie Philantrope on a swing pass and the senior rocketed to the five-yard line. Alex Soden did the honors on the next play to make it 31-0.

The backups picked up two more points when Cooper Marengi and Matt Giannasca trapped Stott in the end zone for a safety. Finn set it up by pinning the Clippers on their two-yard line with a 52-yard punt.

“We need to be less sloppy,” Weidman said when asked what improvements needed to be made. “We had a lot of first game stuff going on in that first quarter. We have some things to clean up.”

The Pioneers hit the road this week to take on Division 3 Danvers. The experienced Falcons return seven defensive and six offensive starters from a team that went 6-5 last year and made it to the D3 Northeast quarterfinals before falling to Tewksbury.

They started the season in impressive fashion trouncing last year’s Division 4 North finalist Winthrop 43-0. Danvers’ home field is being redone so they are playing their home games at Bishop Fenwick, which necessitates the Saturday night game. Game time in Peabody is 7 p.m.