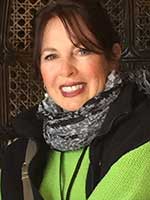 LANDER, Wyo. — Dara Weller of Lander, Wyo. passed away on Tuesday, May 24.
Dara was born June 3, 1959 in Winchester to George and Mary Giglio. She was married to Karl Weller June 1, 1996. Dara has two children whom she loved dearly, Christina Katya Gian Weller and Jackson Gian Bec Weller.
Additionally, Dara has three brothers: George (Paula Epler) Giglio, Christopher (Patricia) Giglio and Jonathan (Lisa) Giglio. Dara has seven nieces and nephews. She was preceded in death by her father, George Giglio Roland.
Dara grew up in Wakefield and moved to Lander, Wyo. in 1989.
Dara had a lengthy relationship with higher education. Education was her passion in life. Dara received her B.A. from Boston State College, her M.A.T. from Simmons College Graduate School of Education, summa cum laude. Dara studied English and American Literature at Harvard University. She was currently pursuing her Doctorate of Education at the University of Wyoming.
Dara received numerous honors and awards in the field of education. She was awarded a National Endowment for Humanities Fellowship in Vienna, Austria, for Humanities Curriculum. Ohio State University awarded a Fellowship in Istanbul, Turkey for Cross-cultural Studies. U.S. State Department chose Dara for a Teacher of Excellence and Best Practices Fellowship to teach in Pune, India. Fulbright Foundation awarded her an Education for Sustainable Development Fellowship to study and teach in Japan. Dara was preparing for a second Fulbright Fellowship to do research in England on the impact of Humanities in Education.
Dara worked at St. Stephens Indian School for 27 years. She was the founder and Director of Gifted and Talented for the last 25 years. She also served as Curriculum Director for several years and was one of the lead grant writers during her tenure. In 2009, Dara was named Bureau of Indian Affairs Teacher of the Year.
Dara was a passionate educator. She wanted her students to know she loved them unconditionally and that they were embarking on a journey together. Dara felt that education should be fun, enlivening and maybe a bit messy (she loved Ms. Frizzle). Dara brought a diversity of experiences to her students: Ballet, Teton Science School, renowned poets and authors, opera and a live collection of some of the most venomous snakes in the world. She was a leader in project-based learning. This led to the multi-generational project known as the Buffalo Hide Tipi Project. She produced with the students of St. Stephens two award winning documentaries: We are the Arapaho People and Listening for a New Day: The Making of an Arapaho Buffalo Hide Tipi and was in production on a third film, Arapaho Truths.
Dara’s greatest honor occurred in 2001, when she was adopted in to the Northern Arapaho Tribe. She was given the name Hii3einonsei, which means Buffalo Woman. This was in recognition of the Buffalo Hide Tipi Project and her commitment to the students and community of St. Stephens and the Arapaho culture. Over the years, when Dara would speak of this honor, it would move her to tears.
Dara’s other great passion was her family. She deeply loved her children. We had many fun family trips and holidays together. In the years after her diagnosis, Dara made a point of having several memorable experiences as a family. This included a road trip through Italy and exploring Mayan cultural sites throughout the Yucatan. Dara couldn’t stop talking about our last trip together; Salt Lake City Comic Con. Dara was a Star Trek Geek and had a long held dream to go to a Comic Con, she was delighted to see her children have so much fun. Nothing was more satisfying than to see the smile on her children’s faces.
A wake will be held from 4 to 7 p.m. on Thursday, June 2, at the Chapel of Mount Hope in Hudson’s Funeral Home in Lander, Wyo. and a Rosary to begin at 6:15 p.m.
A funeral Mass will be held at 10 a.m. on Friday, June 3 at Saint Stephen Catholic Church in Arapaho, Wyo.