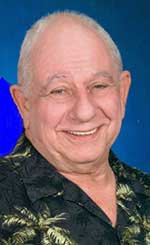 WAKEFIELD — David Hoffman, 74, of Wakefield died Saturday, May 28 at the Virginia Hospital Center in Arlington Va.
Born in Malden on Aug. 3, 1941, he was the son of the late Samuel and Charlotte (Singer) Hoffman.
David was a graduate of the Malden Vocational High School. He spent his entire career working in the automobile industry. Before retiring, he was most recently the service manager at Speedy Muffler in Everett.
David served in the Air Force during the Korean Conflict.
He was a man who loved his family fiercely and enjoyed his many toys, including his Dodge Fever exhibition wheel-standing truck, snowmobiles, ham radios and his antique ‘68 Ford Thunderbird.
He was an active member and much-loved Peer Mentor in TAPS (Tragedy Assistance Program for Survivors).
David is survived by his wife, Barbara A. (Kierstead) Hoffman; his daughter, Kim M. Burditt and her husband Rich of Wakefield; his sister Toibe Knight and her husband Jack of Los Angeles, Calif., and his two granddaughters: Reegan E. O’Brien and Kirbie C. O’Brien. He was preceded in death by his son, Jon D.S. Hoffman.
The funeral service will be held at the McDonald Funeral Home, 19 Yale Ave., Wakefield on Friday at noon. Visitation for relatives and friends will be held at the Funeral Home on Thursday from 4-8 p.m.