Debut of Library Foundation a success 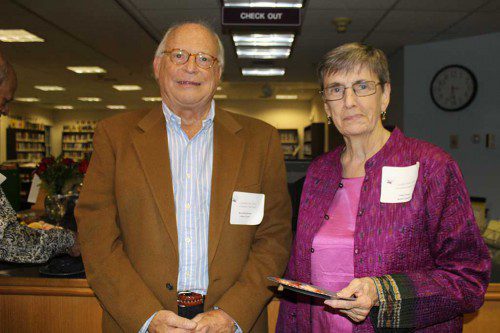 LIBRARY trustee Russ Boekenkroeger, who serves as chairman of the Library Building Committee, chats with retired Library Director Nancy Ryan during the launch of the Lynnfield Public Library Foundation Friday night. A pledge of $1,000 to the foundation was made in Ryan’s honor by former trustee Stanley Schantz. (Maureen Doherty Photo)

LYNNFIELD — The after-hours debut of the Lynnfield Public Library Foundation last Friday night at the library was successfully launched with an announcement of over $5,000 in pledges received to date.

“We have waited several years to see it come to fruition and we’re so glad that you are here with us to celebrate,” Library Trustee Faith Honer-Coakley told the 20 guests gathered on the main floor of the library as she expressed her hope that this support will enable the town’s library to serve as “the very heart of our community.”

“We are gratified that our quest to establish the Lynnfield Public Library Foundation as a library support organization is rapidly moving toward becoming a reality,” she added.

Documentation to become a certified non-profit organization is being submitted, which means these pledges will soon be turned into “actual donations,” Honer-Coakley said.

In its mission statement, the Foundation seeks to support “the innovative vision of the Lynnfield Public Library through relationship building with those who share a passion for the Library’s mission. The Foundation’s goal is to seek and secure personal, community, corporate and estate giving for an endowment that will enrich the future of learning and knowledge and enhance the Library’s financial standing.” 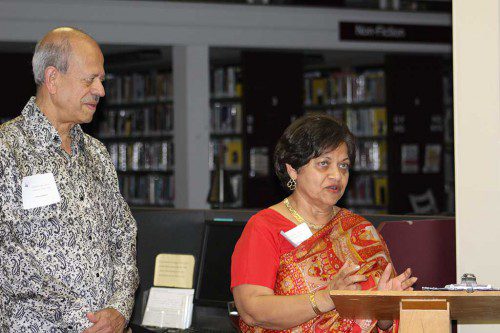 Honer-Coakley said during this period of initial development of the Foundation, they are inviting library patrons, residents, businesses and other supporters to join in the conversation about the “Foundation’s vision and future projects.”

“Tell us what you are excited about for the library’s future and help us shape the Foundation to support the library as the very heart of our community,” she said, adding that the Foundation will make “every effort to honor the wishes of each of our donors.”

Those in attendance were thrilled to hear Honer-Coakley list the inaugural pledges made to date, including two pledges of $1,000 each from former Library Trustee Stanley Schantz. One was pledged in memory of the late Seavey Bowdoin, who served as a trustee for 34 years until his passing this summer at age 96, and the other was pledged to honor retired Library Director Nancy Ryan.

Dr. Victor Saldanha and Dr. Janine Rodrigues-Saldanha, both longtime library supporters in Lynnfield and in India, where they grew up, pledged $2,500 to the Foundation. Honer-Coakley and her husband, Peter Coakley, have pledged $500, and another $250 was also pledged by an unnamed donor, bringing the total pledged to date to $5,250. 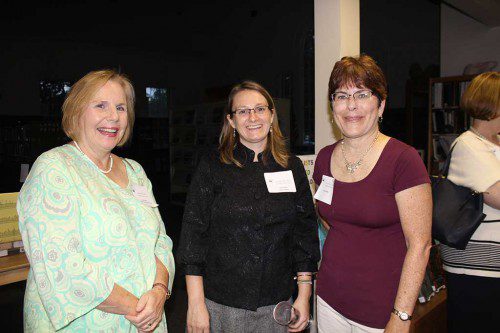 “The library is such an incredible institution. It has something for everybody,” said Dr. Rodrigues-Saldanha, who was recently appointed to complete the unexpired term of the late Seavey Bowdoin. Commenting that her own mother was a trustee at the Bombay Library, she recalled, “I haunted that place.”

The establishment of a nonprofit support organization for the library goes hand in hand with the plans by the town and the Board of Library Trustees to seek a grant from the state to help build a state-of-the-art library on a portion of land at the Reedy Meadow Golf Course.

Library Trustee Russ Boekenkroeger, who is also chairman of the Library Building Committee (LBC) gave a brief update on the status of that project. He said a perc test for the future septic system has been done on the site and the Board of Selectmen has “agreed to cut a parcel of land out and declared it surplus to golf course operations.”

The next step in this process is to bring a warrant article to the voters at October Town Meeting on Monday, Oct. 17 seeking two-thirds support to allow this portion of the land to be transferred to the control of the Board of Library Trustees.

Without an affirmative vote, the trustees and the LBC will be unable file for the next step of the grant cycle in January 2017. “It’s a procedural matter. This is not voting on the library; it is just voting on the land,” Boekenkroeger said, adding he hoped to see strong support at Town Meeting by the townspeople, just as there had been last April. 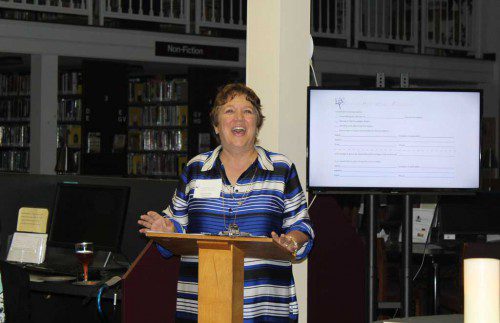 FAITH HONER-COAKLEY, a library trustee, and her husband Peter have pledged $500 to the Foundation. (Maureen Doherty Photo)

Boekenkroeger explained that Library Director Holly Mercer and the building committee are working with the architects to finalize the next stage of the grant process, which involves a document that is 150 to 200 pages in length. The state will also give the town credit for one-half the value of the land as part of the grant process, he said. The land is currently being appraised.

“We all can feel a whole lot of momentum happening around the library right now. This is something that those of us who are close to the place really feel excited about,” commented Bob Calamari, chairman of the Library Board of Trustees, who added the trustees hope the Foundation’s nonprofit status is finalized by the end of this year.

“It will enable us to supplement a lot of the great things that we are doing from an operating perspective. It will help us do the things that will fall on our shoulders as the building gets off the ground. It will also allow us to consolidate a lot of funds,” Calamari said. He explained that the many donations made to the library over the years, some of which have restrictions, have been “centralized in the General Fund in town.” By having a nonprofit foundation in place, the trustees will be have a mechanism in place to oversee existing and future donations for library operations and programming.