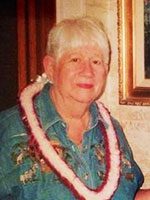 Dolores was predeceased by her parents, Raymond and Helen DeRenzo and her beloved husband Pasqualino V. Marrama.

Dolores was employed by the Commonwealth of Massachusetts for many years but her true love in life was her family. She loved and cared deeply for her husband, her children and later on in life, she became “Grammy” to her grandchildren and always strived to provide a loving, safe and welcoming home for them. She was generous and kind to friends and acquaintances throughout her life as well.

Her interests included reading, opera, the family pug dogs and frequent trips to coastal Maine. She and her husband spent many winters together in Honolulu, Hawaii, where she introduced fine Italian cuisine to the many friends that she made there.

She will be deeply missed and mourned by all whose lives she touched.

Funeral services were private and limited to immediate family only.

In lieu of flowers, contributions may be made to Brigham & Women’s Hospital, 75 Francis St., Boston MA 02115.