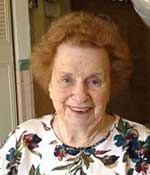 Dorothy was born in Boston on Jan. 28, 1924 to Walter and Theresa (Ring) Johnson. She was raised in East Boston and graduated from East Boston High School. She married the late Ralph Flint and settled in Medford to raise their family.

Dorothy worked as an office manager for the First National Supermarket for over 15 years.

Dorothy and Ralph built a house on Long Lake in Bridgton, Maine and spent many years there together. Later in life, Dorothy split her time between Bridgton in the summer and Dunedin, Fla. as did many of her friends.

Dorothy loved her family very much, including Katie, the pet cat she considered to be her only granddaughter.

She was the beloved wife of the late Ralph Flint. She was the loving mother of David Flint of Florida and Kenneth Flint and his wife Anne of Saugus. She was the mother-in-law of Susan Flint of Braintree. She was the proud grandmother of Lucas.

In lieu of flowers contributions may be made to the Bridgton Public Library, 1 Church St., Bridgton ME 04009.