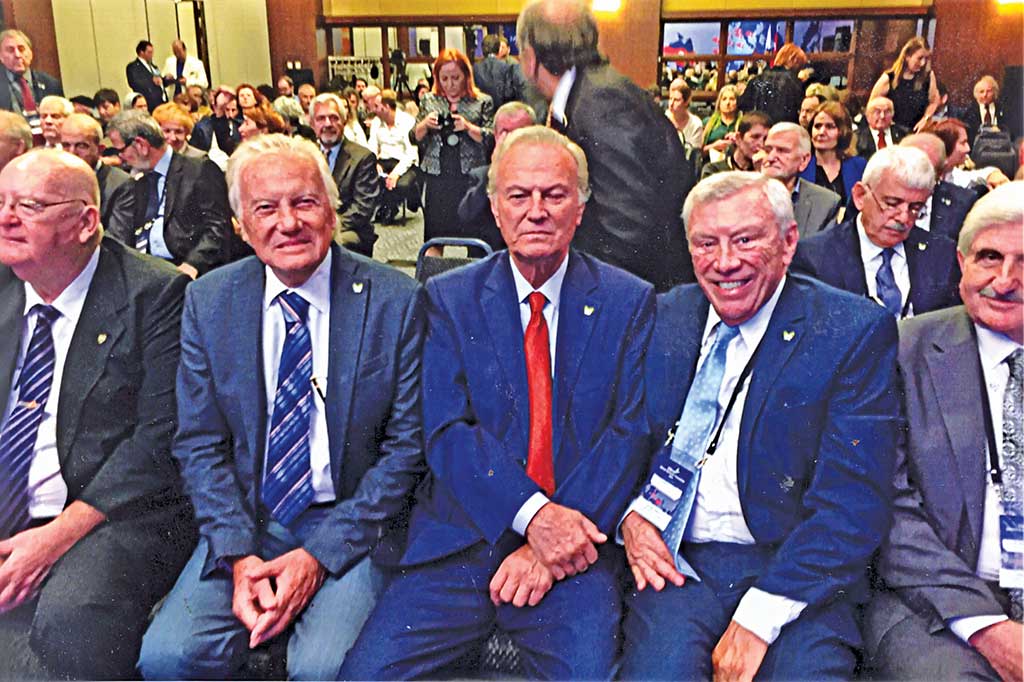 LYNNFIELD — The American Dream as symbolized by the image of the scrappy immigrant who rises above the odds to great heights of professional, social and personal achievement is epitomized by Dr. Ozcan (John) Tuncel. 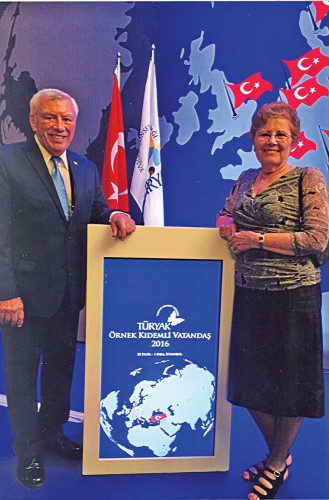 OZCAN AND ILKAY TUNCEL traveled to Istanbul this fall where Ozcan was the only Turkish-American to be presented a Lifetime Achievement Award from the TURYAK Association of Turkey. (Courtesy Photo)

The multifaceted achievements of this spry nearly 80-year-old gentleman were recognized by his native country of Turkey when he was presented with a Lifetime Achievement Award in Istanbul from the TURYAK Association of Turkey this fall.

The TURYAK Senior Citizens Council Association is a member of the International Federation on Aging (IFA). It is the Turkish equivalent of AARP and based in the capital of Ankara, he said.

Dr. Tuncel and his wife of 50 years, Ilkay, recently returned from Istanbul after attending ceremonies where the achievements of 76 men and women were celebrated, 15 of whom live abroad around the world.

Dr. Tuncel, who has called Lynnfield home since 1978, was the sole Turkish-American to receive the honor. The honorees ranged from those who worked with the homeless in Turkey to famous Turkish movie stars and captains of industry.

This year marked the first year that TURYAK expanded its Lifetime Achievement Award to recognize the accomplishments of those who live outside the country, particularly in the U.S., Germany, England, Australia and Canada, which have a sizable Turkish immigrant presence.

TURYAK contacted its foreign ministry in Turkey “to help them to select individuals in these countries,” he said. The Turkish foreign ministry then contacted the embassies in each country seeking nominations. The U.S. Embassy sought nominations from Turkish consulates throughout America and out of the all nominations received, Dr. Tuncel was chosen.

“The priority in the selection is first you have to be very accomplished in your profession and secondly, you have to be able to help social activities, especially for the Turkish Americans,” he explained.

“In my professional background, I came to this country as a foreign student on a Turkish government scholarship at the beginning of 1956.”

Upon his graduation from public high school in 1955, he recalled that the Turkish government “picked students who were highly qualified from the science division throughout the country. There were 600 of us and they put us through the exams. Five of us were picked to come to the United States, so I was No. 3 out of 600.”

A native of Izmir, Turkey, his parents, to say the least, were surprised by and proud of the academic accomplishments of their only child.

“My parents didn’t know how to read and write so for them it was a big thing,” he said. He added that the opportunity to come from Turkey to the United States in 1955 “was unheard of,” because his homeland at that time “was extremely isolated.”

Tuncel arrived with only a basic knowledge of high school-level English, recalling fondly that Andrew Jackson was a favorite historical figure from his American history classes in high school. 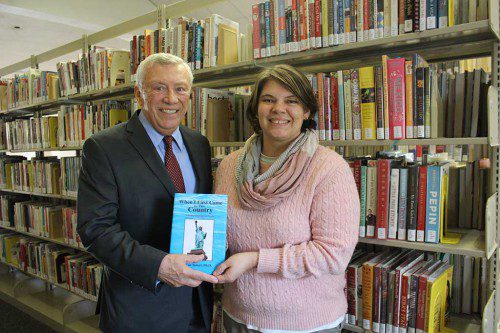 DR. OZCAN TUNCEL (left) presented two copies of his autobiography, “When I First Came To This Country,” to Assistant Library Director Samantha Cabral last week. A native of Turkey who devoted his 40-year career to GE, has resided in Lynnfield with his family since 1978 and was recently presented a Lifetime Achievement Award in Turkey. (Maureen Doherty Photo)

Accepted to attend Lehigh University, he was immersed in an English language school at Queens College and Columbia University for one year. He and the other foreign students found the science classes to be easier than their liberal arts classes at Lehigh, but he stayed on track to earn his B.S. in Mechanical Engineering in just four years, graduating in 1960. Two years later he earned his M.S., also in Mechanical Engineering from Lehigh.

“We were supposed to go back to Turkey. For six years of education, we were supposed to work for the government for six years,” he said. But upon graduation from Lehigh in 1962, he received seven job offers and accepted a position at General Electric Company’s Large Steam Turbine Department in Schenectady, N.Y. It was a fateful decision because he would remain with GE throughout his 40-year career.

“So I paid them back while I was working at General Electric Company, with interest,” he said.

He was then chosen to attend the three-year Advanced Engineering Program (AEP) offered to a select group of GE engineers to prepare them for future positions of leadership within the company during which they solved real-life problems rather than textbook problems. He completed this program in 1966 and subsequently earned his Ph.D. in 1967 from Brooklyn Polytechnic Institute (BPI), notably as the first graduate of the GE-sponsored program.

While attending BPI, Ozcan met his future wife in NYC.

“It was a Turkish Republic State Ball that we were both attending,” Ilkay recalled. She had immigrated to the U.S. with her family from Cypress at age 9 and grew up in Maryland.

After getting married and receiving his Ph.D., he took a two-year leave of absence from GE to enable the newlyweds to return to Turkey while he completed two years of compulsory military service as an officer in the Turkish Navy. “Otherwise, he could never go back to Turkey,” Ilkay said. Their oldest daughter, Nukhet, was born in Turkey, she said. He taught naval machinery in the Turkish Naval Academy’s post graduate school. In 1975, he was awarded a Docent Dr. degree from Istanbul Technical University. 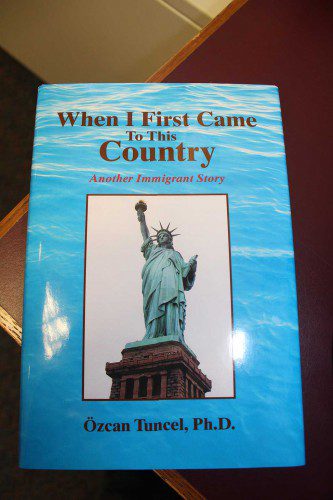 THE LYNNFIELD Public Library has added two copies of the autobiography of Ozcan Tuncel, Ph.D., “When I First Came To This Country, Another Immigrant Story,” to its adult non-fiction collection. Dr. Tuncel is a Lynnfield resident. (Maureen Doherty Photo)

“The one excellent thing that GE had was there was no discrimination whatsoever,” his wife recalled. “Whether you were a foreigner, you were Jewish, Black, Muslim, no discrimination at all.” Her husband agreed. “As long as you were good at what you were doing, GE really looked after you,” he said.

Upon returning to Schenectady, he continued to design and develop large steam turbines for electric power plants while serving as an adjunct professor of Mechanical Engineering at Union College.

In 1978, the family, which now also included their son Dogan and daughter Muge, moved to Lynnfield when Ozcan accepted a position at GE in Lynn as manager of Turbine Development Engineering in the Medium Steam Turbine Department. Among the significant projects developed under his leadership were the design of the U.S. Navy’s submarine turbine blades and quiet ship service machinery.

“I started as a design engineer but as soon as I had my Ph.D. I became a development engineering manager. If you are going to develop something you have to know what the design is,” he said.

Considered to be a pioneer in power generation technology as well as an internationally respected educator, researcher, trouble shooter and conference presenter, he holds seven patents, mostly involving naval machinery, and has extensive publications in his field.

In Lynn, they were building small industrial turbine and U.S. Navy machinery. The technology is still in use today and all but one of his patents remain under “secrecy orders” per the government, he said.

“The concern was with the U.S. nuclear submarines and aircraft carriers, and I was in charge of the developing of the steam turbines and the turbine machinery equipment. Most of the patents that I have involve the submarine equipment,” he said.

“One important one was a later patent on destroyers on gear noise isolation,” he said. In the early 1980s, he was a member of GE’s DDG-51 project design team and was featured in a GE publication in which he presented an overview on gear noise control for this class of ships.

“In a destroyer you have huge gears because the gas turbines rotate at a high speed and the gears reduce the speed, so they go into the propellers. The gears, they go click, click, click. They make a lot of noise. But the gears attach to the hull of the ship and the hull would transmit the noise,” he said.

“I designed and built isolators so that the noise from the gears would not be transmitted to the hull. That was the last patent,” he said.

In the 1983 GE publication, he explained, “…the vibrations produced by a ship’s equipment and machinery – including its gears – combine to create a highly individualized sound pattern very much like the human voice print. These vibrations are carried throughout the structure of the ship. And because of the sound-transmitting properties of water, the sound vibrations become highly detectable to submerged ‘listening’ equipment.”

Such equipment can be used to identify the type of approaching vessel down to the specific ship, he further stated, which means “…detectable noise is a very real threat to safety at sea. And noise control becomes one of the most important design aspects of any Navy ship.”

In recognition of his “outstanding individual achievement” for his design innovation to resolve this issue, G.E presented Tuncel with its 1983 Power Systems Sector Engineering Award for Professional and Social Activities to the Industrial and Marine Steam Turbine Division.

Upon his retirement from GE in 2002, he was honored by the company for his “outstanding contributions during a career of faithful service and dedication.”

The Tuncels built their house on Wildewood Drive, where they still reside. Today they are the proud grandparents of six: Molly and Emily Malone, and two sets of twins born just five months apart – Patrick and Audrey Malone, and Paxton and Ainsley Tuncel, who are now 6.

Its purpose was to bring Turkish immigrants together to “deal with the issues the Turkish-American community was facing at that time,” he said.

The Tuncels also mentored about a dozen Turkish college students in their Lynnfield home over the years, giving them a place to feel at home, especially during the holidays. Many of these students returned to Turkey and today they are leaders in their fields.

When he first came to the U.S., he missed his parents and his many cousins and was grateful that his parents were able to visit him here. “Every year we did go to Turkey so we did not break off from our roots, and we have a very large group of friends in Turkey to this day,” he said.

After his retirement he decided to write his autobiography, entitled, “When I First Came To This Country,” initially for his children and grandchildren. Having started out in life in a family that had few educational opportunities, he said, “education was extremely important for me. And I also did not want my children and grandchildren to forget their background.” His wife was involved in the process as well, serving as his editor. It was published in 2003.

“We are also honored to be presented with copies of his autobiography, When I First Came To This Country, so that his story can have a permanent home in the library, allowing it to be shared with the entire community,” Cabral added.