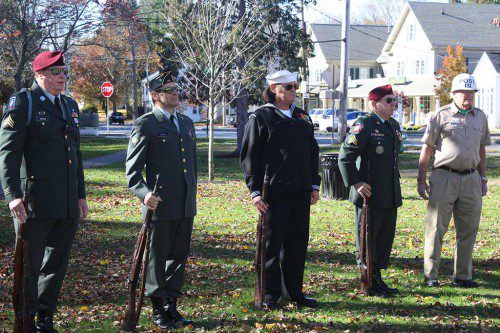 LYNNFIELD — Five hundred residents took advantage of a beautiful fall morning to honor and pay tribute to members of the armed forces during the annual Veterans’ Day ceremony on the Town Common Nov. 11.

After posting the colors, Veterans’ Service Officer Bruce Siegel led the ceremony’s attendees during a rendition of the Pledge of Allegiance. Siegel also provided the opening remarks.

“Today, we honor all of our brave men and women who currently serve and have served our great country,” said Siegel. “America’s military men and women risk life and limb every day so that we can be free. And while we set aside Nov. 11 as a special day to honor and remember our veterans, we should continuously endeavor to serve our veterans as well as they have served our nation.”

Siegel said, “a veteran, whether active duty, discharged, retired or reserve, is someone who, at one point in his life, wrote a blank check made payable to the United States of America for an amount of ‘up to and including his life.’”

“That is honor,” added Siegel. “There are far too many in this country today who no longer understand that fact. An American veteran should never have to worry about food, shelter or clothing. They stand up and put themselves in harm’s way to protect their homeland and everyone living in it. Their duty was to keep us safe. Our duty is to make sure they are safe when they come home. We must never forget our veterans.”

Siegel said “the importance of Veterans’ Day is to honor and celebrate veterans for their patriotism, love of country and willingness to serve and sacrifice for the common good.” He also noted “many people confuse Memorial Day and Veterans’ Day.”

“Memorial Day is a day for remembering and honoring military personnel who died in the service of their country, particularly those who died in battle or as a result of wounds sustained in battle,” said Siegel. “Veterans’ Day is the day set aside to thank and honor all those who served honorably in the military — in wartime and peacetime. In fact, Veterans’ Day is largely intended to thank living veterans for their service, to acknowledge that their contributions to our national security are appreciated and to underscore the fact that all those who served, not only those who died, have sacrificed and done their duty.”

In addition to serving in the U.S. armed forces, Siegel said, “this special group often provides the vital services that enable our communities to function.”

“Chances are that if you surveyed your local police or fire department, you would find that a disproportionately high percentage of its members are veterans,” said Siegel. “When an emergency hits, there is a good chance that it is a veteran that is first to respond.”

Siegel encouraged residents to repeatedly thank veterans for their service not only on Veterans’ Day and Memorial Day, but every day.

After Siegel concluded his remarks, the high school and middle school bands performed the National Anthem. Father Paul Ritt, pastor of the Lynnfield Catholic Collaborative parishes of Our Lady of the Assumption and St. Maria Goretti churches, gave the invocation.

Board of Selectmen Chairman Phil Crawford gave the keynote address. He began his remarks by thanking Siegel for organizing the ceremony and everything he has done for the United States.

Crawford also thanked local police and firefighters for “all they do to protect us and keep us safe every day.” He said Veterans’ Day is a day to “honor our heroes, to remember their achievements, their courage and their dedication and to say thank you for their sacrifices.”

“We owe so much to our veterans and it is debt we can never truly repay,” said Crawford. “We owe them our way of life, our freedom to live, work and raise our families as we please. Honoring the sacrifices many have made for our country in the name of freedom and democracy is the very foundation of Veterans’ Day.”

Crawford noted General Colin Powell once said at a Veterans’ Day speech given at Arlington National Cemetery that veterans’ “sacrifice in the name of peace and freedom have made this nation what it is today” and Americans “must ensure that their sacrifice was not in vain.”

“On the 11th hour of the 11th day of the 11th month, the fighting of World War I ended in 1918,” said Crawford. “President Woodrow Wilson called it ‘the War to end all Wars,’ and declared Nov. 11 as Armistice Day. After World War II and the Korean War, President Dwight D. Eisenhower renamed the holiday Veterans’ Day to salute all veterans, no matter when or where they served.”

Crawford asked the ceremony’s attendees to join him in recognizing and thanking members of the armed forces for their service.

“I want all of you that have gathered here today to say thank you to our veterans,” said Crawford. “Tell each of them how much you admire their courage.”

Crawford noted that author and World War II correspondent Elmer Davis once said, “this nation will remain the land of the free so long as it is home of the brave.”

“The War on Terrorism has helped us realize how truly unique the American way of life is,” added Crawford. “The freedom we enjoy today is extremely special and that is why we must defend it. As Thomas Jefferson once said, ‘the price of freedom is eternal vigilance.’ Today, we give thanks to live in a country where citizens of every generation willingly and courageously raise their hands to stand the watch.”

In closing, Crawford thanked everyone for attending the ceremony.

“God bless you and your families, God bless our troops and our veterans and God bless the United States of America,” Crawford concluded.

Donato presented an award to Corporal Richard “Dickie” Weeks for his service to the town and United States.

“Corporal Weeks has marched in the Memorial Day Parade for 75 years,” said Donato in an interview with the Villager after the ceremony. “He began as a Cub Scout, Boy Scout and then as a veteran. He did miss one year when we sent him to Korea during the war. He has supported the town and the citizens of this country. We are proud to have him as a member of American Legion Post 131.”

In an interview with the Villager, Weeks said he was “surprised and honored” to receive the award.

“I have lived in this town all my life,” said Weeks. “I was raised in this town, went to school in this town and I love this town. I didn’t expect this. We had a great crowd here and I want to thank everybody for showing up.”

During the ceremony, Siegel thanked Weeks for his service.

“Congratulations to Dickie Weeks for being recognized for his dedication to the American Legion,” said Siegel. “Stay well.”

After Weeks was presented with the award, Donato, Roden, Tully and Lukas, under Siegel and Weeks’ direction, fired three blank cartridges into the air in honor of veterans.

“God of power and might, you are our rock and refuge in times of distress,” said Fr. Ritt. “You empower us to overcome violence by transforming weapons of destruction into tools of justice. We ask that you bless all of our veterans in the Army, Navy, Marines, Coast Guard and Air Force and all those who are willing to lay down their lives for their fellow citizens. Give them hope and courage and strength.”

Siegel dedicated the ceremony to a special friend and local U.S. Navy veteran.

“In September, Lynnfield lost one of its favorite veterans,” said Siegel. “His name was Tony Grasso and he was a great friend. I’d like to dedicate today’s celebration to him.”

Siegel also thanked the DPW and Historical Society member Linda Gillon for getting the Town Common and Meeting House prepared for the event. He also thanked Big Y and Costco for donating to the ceremony.

In closing, Siegel said he was “thrilled” to see 500 people come together to honor the town’s and country’s veterans.