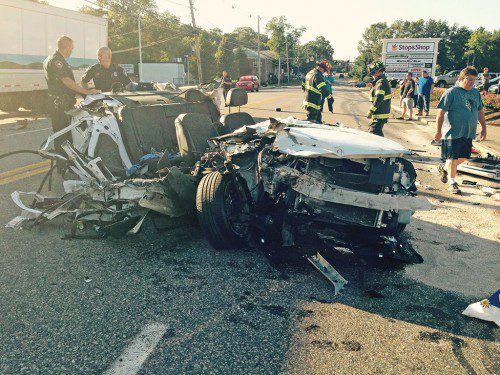 THE DRIVER OF THIS CAR, a Chevrolet Impala, survived the crash with a tractor trailer on Route 28 near North Reading Subaru. (Photo Courtesy NRFD)

NORTH READING – North Reading and State Police are investigating to determine the cause of a very serious motor vehicle crash on Wednesday, Aug. 12 involving a car and a tractor–trailer truck on Main Street. But one thing’s for sure – the efficient and professional response efforts of North Reading police and fire emergency responders helped bring about a successful conclusion.

Amazingly, despite the violent nature of the crash, the female driver of the car survived and was transported by MedFlight helicopter to a Boston hospital for treatment.

At around 5:30 p.m. on Aug. 12, police and fire received multiple 911 calls reporting a serious crash in the area of North Reading Subaru, located at 260 Main St. According to a statement from North Reading Police Chief Michael Murphy, a preliminary investigation indicated that a tractor–trailer truck may have been illegally parked on the side of the road in the southbound lane, possibly preparing to unload a delivery to the auto dealership, when a woman, driving a Chevrolet Malibu sedan, crashed directly into the rear of the truck.

The impact of the crash sheared off the roof of the car, sending it spinning into the northbound lane. The car’s tires and doors were also sheared off. No other vehicles were involved in the crash, despite the fact it happened at rush hour.

North Reading Police notified the Fire Department directly of the crash. Patrolman Sean O’Leary was the first public safety official on the scene, followed by Fire Chief Bill Warnock who lives nearby. The Fire Department dispatched Engine 2 and Rescue 1 to the scene at 5:33 p.m. and quickly secured MedFlight from Boston to transport the crash victim within four minutes of the first call.

It took fire department personnel about 20 minutes to extricate the driver of the car, an Andover woman in her 30s, from the wreck. Chief Warnock said the woman was conscious when she was extricated at 5:52 p.m., 21 minutes after the call was received. Fire personnel who responded to the scene included Captain Eric Pepper and Firefighter Tom Harris, Captain Don Stats and firefighter Corey Harris and call firefighter Jeff Carey and off duty personnel such as firefighter/paramedic Herb Batchelder and Sean O’Brien. Batchelder went right to the patient and O’Brien was sent to secure the landing zone for the MedFlight helicopter at Mullin Field on Lowell Road. 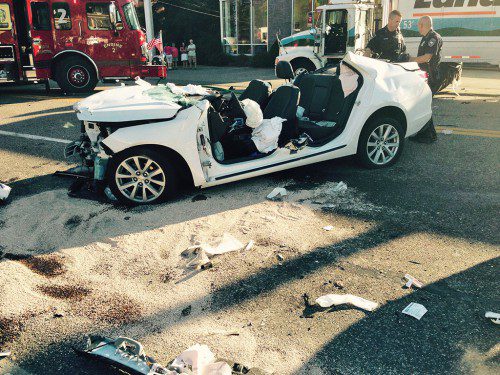 THE IMPACT of the crash on Route 28 sheared the roof off this Chevrolet Malibu and sent it spinning into the northbound lane, but the driver survived. (Photo Courtesy NRFD).

The MedFlight helicopter landed at Mullin Field at 5:51p.m. The North Reading ambulance was at the field a few minutes later and by 6:11 p.m., the helicopter was in the air with the patient, bound for Beth Israel Hospital with serious injuries that were not believed to be life threatening.  In a little over 40 minutes, police and fire personnel had responded to the scene, extricated the woman from the car wreck, transported her in the ambulance to Mullin Field and she was in the air to Boston.

At around 7:07 p.m., the Fire Department ambulance had to return to the scene because one of the tow truck operators towing the car cut his arm.

The crash is under investigation by the North Reading Police with the assistance of the Mass. State Commercial Vehicle Enforcement Section, otherwise known as the State Police Truck Team.

Main Street was closed in both directions during the investigation.

“This is a very serious crash, involving injuries and a very active investigation,” Chief Murphy said.

Because the crash occurred at rush hour, the frantic efforts of police and fire crews to rescue the trapped woman were witnessed by a crowd of about 150 onlookers, Chief Warnock reported. When it was over, people in the crowd applauded, something Warnock said he’s never seen before in his career.