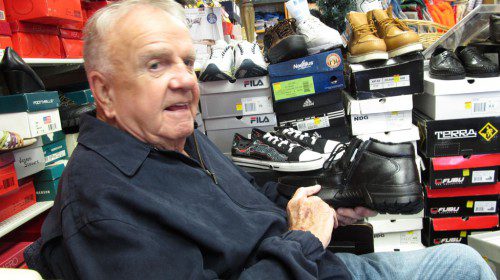 WEST SIDE resident Martin Long found a shoe store close to home where he can buy his favorite shoes at decent prices — E&D Shoes and Workwear at 18 Albion St. (Gail Lowe Photo)

So, after learning about a new shoe store on Albion Street called E&D Shoes and Workwear, they hightailed it over to see what was what.

The 80-year-old Martin does not look his age and wanted snazzy-looking shoes.

He tried on a pair of black Advance walking shoes —E&D’s own line — and, by gosh, if they didn’t make him look at least 20 years younger.

He then tried on a pair of low-rise, fur-lined black boots with side zippers. Sold.

“He needs new socks, too,” said Eleanor, clearly on a roll.

And Santini proceeded to strip Martin of the white socks he was wearing and outfitted him with a dandy new pair.

Now, Martin will walk around, not only in style but in comfort, too. He left E&D a few dollars poorer but now he has a new lease on life.

He said he could wear his new footwear to church and out for dinner. He could even wear them in Florida this coming winter.

Eleanor put in her two cents worth. “But not for shoveling,” she said.

David Santini and his wife Elna, owners of E&D Shoes and Workwear, have made shoes their business for their entire 50-year career. David worked at a shoe store in Springfield and then opened his own stores all over the state, including right here in Wakefield in the 1980s. His last store was in Claremont, N.H., but he closed that one in the spring when he decided to retire. He then moved back to Massachusetts.

Like many retirees, Santini missed the interaction with his customers, he had too many leftover shoes from his previous store and he missed something else — the income.

That’s when he and Elna decided to open a new store. Since they had previously operated a shoe store on Albion Street, they took a drive one day and found a storefront empty a few doors away from the Daily Item building.

“We looked at nine towns before deciding on Wakefield,” David said. “Wakefield is a hometown kind of place. People can walk here. They even come over from Lynn.”

And come, they do. While a visitor was talking with the Santinis, no fewer than eight people came through the front door, all looking to buy new shoes.

David is a walking encyclopedia when it comes to footwear. He knows his brands. He knows what’s good and what’s bad for feet and favors orthopedic-type shoes. He knows every bone, every tendon, every muscle and ligament in the human foot. He also knows that selling shoes produces a steady income because people always need shoes.

“The foot controls the whole body,” said Santini. “If your feet are off, your whole body is off.”

He said that going barefoot should be against the law, especially while walking on a hard surface, such as a wood floor. Sand or grass, OK, but no hard surfaces. He said it’s a good thing flip-flops are confined to summer. They’re terrible for feet, he said.

David and Elna also know about the need for diabetic people to exercise caution when choosing shoes and he specializes in a line of shoes specifically for those with diabetes.

“They have to be very careful about chemicals from dyes leeching into broken skin,” he said. “A person could lose a foot because of dyes. The shoes in my store — the ones for diabetics — contain no dyes.”

The Santinis — now out of retirement since this past summer — wear the shoes they sell and hope everyone else will follow suit, including their own family members — four adult children and nine grandchildren.

“Our oldest granddaughter just graduated from college,” said Elna. “We’re so proud of her.”