A difference of opinion in Ninth Essex 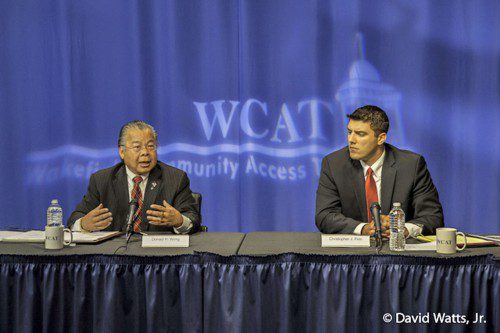 INCUMBENT NINTH ESSEX REPUBLICAN Donald Wong (left) and Democratic challenger Christopher Finn, both of Saugus, squared off last Wednesday during a WCAT debate. They are battling for the right to serve all of Saugus and Precincts, 1, 2 and 7 here in the state House of Representatives. (David Watts Jr. Photo)

Wong was first elected to the Legislature in 2010 after serving on the Saugus Board of Selectmen. His family owns the Kowloon Restaurant on Route 1 in Saugus.

A graduate of Salem State University and Suffolk Law School, Finn is an attorney who has served as an elected Town Meeting member and on the Zoning Board of Appeals in Saugus.

Questions were posed to the candidates by representatives of the Wakefield Daily Item and the Saugus Advertiser. WCAT producer David Watts Jr. served as moderator.

The candidates held different positions on Ballot Question 1, which would repeal a 2013 provision that would automatically increase the Massachusetts gasoline tax each year based on the percentage change in the Consumer Price Index.

Finn said that he would oppose Question 1. “Our roads are crumbling,” Finn said. “Our bridges are crumbling. That’s money we need to improve our roads and bridges.”

Wong said that he would be voting “Yes” to eliminate the automatic yearly increase in the gas tax, arguing that it would cause the cost of living for the average person to go up since every product purchased is transported by trucks.

On the question of legalizing marijuana in Massachusetts for recreational use, Finn noted that the voters had spoken in approving the drug for medicinal purposes. He said that he would like to monitor states like Colorado that have legalized recreational marijuana to see if there are any negative consequences.

Wong opposed legalizing pot for recreational use but was OK with it for medical purposes. He added that he believed that medical marijuana should be handled by pharmacies, which are already equipped to deal with prescriptions, as opposed to creating a new class of marijuana dispensaries.

The candidates differed on expanding the bottle law to require deposits on most beverage containers.

Finn called the bill “long overdue” and maintained that it would “do a lot to clean up litter in our communities” and save cities and towns money on trash collection fees.

Wong opposed adding deposits to more types of beverage containers, pointing out that when the original bottle law went into effect, there was no curbside recycling. “We have it now,” Wong said, suggesting that families with children would be hurt by the added deposits to juice and water bottles.

On changing the Chapter 70 formula for state aid to local public schools, Finn agreed that the formula needs to be overhauled. “Our district isn’t receiving its fair share,” he said. Additional Chapter 70 funds, he suggested, could be used to reduce class sizes and increase after school programs.

On the question of welfare and EBT abuse, Finn said that the issue had already been “somewhat addressed in the Legislature by requiring photo IDs.” He maintained, however, that more needs to be done to prevent abuse. “It’s the taxpayer’s money,” he said, while adding that programs like EBT were also “a necessary service,” without which we might see an increase in crime. “We need increased oversight,” Finn said. “It comes down to efficiency and leadership.”

Wong pointed out that the Legislature has tried to make some corrections to curb EBT abuse. “But there needs to be more,” Wong said, arguing that when abuse is found, court action should be taken to recover misappropriated funds. He cited the case of a drug pusher who was arrested and found to have nine EBT cards. He called for drug testing of benefit recipients. “That’s not what [EBT] was meant for,” he said.

Wong and Finn mainly agreed on how to address the high cost of energy in Massachusetts. In light of a predicted 30 percent rise in electricity costs this winter, both candidates advocated giving homeowners rebates and tax incentives to encourage use of clean, renewable energy sources like solar and wind.

Each candidate was asked how he would distance himself from the lobbying power of special interest groups.

Wong cited the example of his vote as chairman of the Saugus Board of Selectmen to adopt a local option meals tax in Saugus, even though he owns a restaurant in the town.

“I have the people’s interest above my own,” Wong said.

Finn said that he had received no campaign donations from special interest groups. “Representative Wong can’t say that,” Finn said. “I don’t owe anybody anything.”