Tireless advocate for the elderly, deeply involved in civic and political affairs 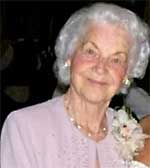 Born in Somerville on October 23, 1919, she was the daughter of the late James and Anna (Ahern) Donegan. She was a graduate of Somerville High School and many specialized programs and graduate studies in Gerontology. She was a resident of North Reading for the past 65 years.

Edith was well known for her elder advocacy and involvement in civic and political affairs. She was the Director of Elder Affairs for the Town of North Reading for many years and also served on numerous regional, state and national boards, committees and commissions on elder affairs. She was appointed to Congressional Advisory Committees on Elder Affairs and was also a long serving member of the Board of Directors of Mystic Valley Elder Services. Edith and her family were extremely grateful for the recognition of her advocacy and efforts when the naming of the North Reading Senior Center was made in her honor.

Competitive and a leader in all of her activities since a young age, Edith was a qualifier for the 1932 and 1936 Olympics as a high jumper. She served as President of the Massachusetts Democratic Women on Wheels and was delegate to both national and state Democratic conventions. As the first elected female constable, she served as longtime Treasurer of the Massachusetts Constable Association. Locally, she headed the Council on Aging and Golden Age Club and served on the North Reading Historical and Antiquarian Society, Fourth of July Committee and the Democratic Town Committee. She was a member of St. Theresa’s Church.

Funeral services were held from Croswell Funeral Home, 19 Bow Street, North Reading on Saturday June 25 at 9:15 a.m. followed by a 10:30 a.m. Funeral Mass at St. Theresa’s Church, 63 Winter St. (Rt. 62), North Reading. Calling hours were held on Friday from 4 to 8 p.m. Burial was in Riverside Cemetery in north Reading. In lieu of flowers, memorial donations may be made in her name to Mystic Valley Elder Services GAP Fund, 300 Commercial St. Suite 19, Malden, MA 02148 or to North Reading Friend of the Council on Aging, 157 Park St., North Reading, MA 01864. www.croswellfuneralhome.com