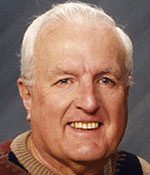 Born and raised in Lynn, he was the son of Edward and Ann Madeline (Doucette) Cocozella.

Mr. Cocozella graduated from Lynn Classical High School in 1951. He was employed at General Electric Co. in Lynn for 38 years, retiring in 1991.

A funeral service will be held at 11 a.m. on Monday, July 25, at the Chapman Cole & Gleason Funeral Home, 475 Main St., Falmouth. A graveside service will follow at St. Joseph Cemetery, Gifford Street, Falmouth.