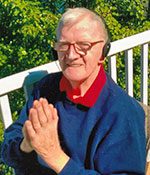 MELROSE — Edward F. Laskey, 87, of Melrose passed away at the Chelsea Soldiers Home in Chelsea on Sunday, January 18.

Edward was born in Cambridge to the late George and Lillian (Newman) Laskey. He was raised in Chelsea and graduated from Chelsea High School. He entered the service after high school and served his country with pride in the U.S. Navy during World War II.

Mr. Laskey worked as a civil engineer for 39 1/2 years for the State of Massachusetts.

Edward has been a resident of Melrose since 1955, was a longtime member of St. Mary’s Church and of the Knights of Columbus Council #128 in Melrose, where he was a Past Grand Knight and started the Squires at the council.

He was a member of the State Engineers Association and was the head of the Moses Credit Union for several years. He loved to dance, take trips to Foxwoods and was an avid Celtic, Patriots and Boston sports fan.

Ed was the beloved husband of 62 years to Mary T. (Aldus) Laskey. He was the loving father of Edward G. Laskey and his wife Elaina of Beverly, Kathleen Baldassari and her husband Thomas of Peabody and Timothy P. Laskey of North Grafton. He was the cherished grandfather of Christopher Hardy, Erin Hardy, Gregory Laskey, Bryan Laskey and the late Michael Hardy. He is also survived by many nieces, nephews and friends.

The funeral was from the Gately Funeral Home, 79 W. Foster St., Melrose, on Thursday, January 22, at 9 a.m., followed by a Mass of Christian Burial in St. Mary Church, Herbert Street, Melrose at 10 a.m.

Burial with military honors at Woodlawn Cemetery in Everett.

Memorial contributions may be made to Alzheimer’s Association, 480 Pleasant St., Watertown, MA 02472.