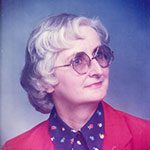 MELROSE — Doris Walsh died peacefully in her sleep on Jan. 14, and is at last reunited with the love of her life, her late husband Frank.

The daughter of Ella and Lou Hammond, Doris was born and raised in Cambridge. She attended Cambridge Latin High School, and later worked as a clerk at Cambridge Hospital until she met and married Frank Walsh of Somerville in 1957. They moved several times, ultimately landing in Melrose, where they settled in 1967.

After Frank died in 1979, Doris went back to work while successfully raising their five children. In her later years, Doris’ life revolved around her church, St. Mary, where she was a devout member of the Sodality and Choir. She was stricken with aggressive Alzheimer’s disease in 2007 and spent her remaining years in assisted living or nursing homes.

She was loved and is survived by her five children, 11 grandchildren and dozens of nieces and nephews.

In lieu of flowers, contributions may be made to the Alzheimer’s Assoc., 480 Pleasant St., Watertown MA 02472. To sign online guestbook and for additional information please visit www.gatelyfh.com.