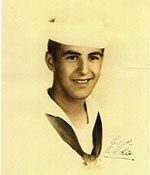 Edward was the beloved husband of 61 years to Marie J. (Martell) Colosimo. Ed was born in Cambridge on June 30, 1927. His parents, Antonio and Elizabeth Colosimo, raised him in Cambridge where he attended Cambridge Rindge and Latin. Edward joined the Navy in 1945, where he honorably served his country until the end of World War II.

Upon returning from the war, Ed became a chef, working in Porter Square, Leslie College and Harvard Business School. Ed belonged to the VFW Marsh Post 442 in Cambridge, where he was able to enjoy the company of fellow Veterans. He was also an avid bowler and could often be found at his favorite bowling alley, Bowl Haven. Ed’s interests were not limited to just bowling. He enjoyed reading, history, politics and crossword puzzles, but most of all he loved his family. His greatest accomplishment were those he left behind. Words could not explain how proud he was of his grandchildren.

Edward was the loving father of Deborah Shruhan and her husband Michael of Wrentham; Joan Short and her husband Douglas of North Reading; Nancy Rizza and her husband Anthony of Swampscott; Edward Colosimo and his wife Catherine of Wilmington; and the late Anthony Colosimo. He was the devoted grandfather of Michael Shruhan and his wife Lauren; Matthew, Caroline and the late Kathleen Shruhan; Harrison and Elizabeth Short; Samantha and Jane Rizza; and Christopher, Sarah and Emily Colosimo. He was the cherished brother of Evelyn Kipp of Tennessee. He is also survived by many nieces, nephews and friends.

In lieu of flowers, memorial contributions may be made to the Melrose Veteran’s Fund, c/o Ryan McLean, 562 Main St. Melrose, MA 02176. To send a message of condolence please visit www.gatelyfh.com.