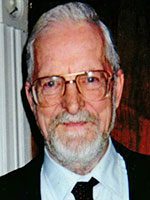 NORTH READING — Gerald W. LaVigne – 87, of North Reading and formerly of Melrose, passed away on Sunday, February 1, 2015, at Meadow View Care and Rehabilitation in North Reading.

Gerald was a graduate of Harvard University. He was a Design Engineer working for Raytheon and Honeywell for 35ve years, until his retirement. He was a resident of North Reading for the past 15 years and a member of St. Theresa’s Church. He was a member of the North Reading Militia (Minutemen) and the Concord Minutemen.

He was a kind, gentle, beloved spouse, a genius, deep thinker and a devoted family man.

His funeral was held from the Croswell Funeral Home, 19 Bow Street, North Reading on Saturday, February 7,  followed by a 10:30 a.m. Funeral Mass at St. Theresa’s Church, 63 Winter Street (Rt. 62), North Reading.  Burial was in Riverside Cemetery in North Reading. In lieu of flowers memorial donations may be made in his memory to: Alzheimer’s Association, 480 Pleasant Street, Watertown, MA 02472.