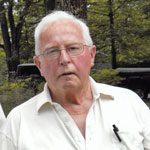 PEABODY — Edward J. Crowley, 87, of Peabody passed away at Salem Hospital on August 27.

Ed was born in South Boston on August 5, 1927 to the late James and Lillian (Turner) Crowley. Mr. Crowley was raised in Southie, attended South Boston High School before joining the Merchant Marine.

Mr. Crowley also received his real estate license and worked in Melrose, Malden and Lynn for many years.

Edward lived in Burlington for several years, Melrose for 20 years and in Peabody for over 25 years.

He was a proud member of the ILA Local #799, the National Maritime Union of America and enjoyed walking the North Shore Mall with his many friends in Peabody.

Visitation was held at the Gately Funeral Home, 79 W. Foster St., Melrose, on Monday, Sept. 1, from 4 p.m. to 8 p.m., followed by a funeral service on Tuesday at 10 a.m. Burial followed the service on Tuesday with military honors at Blue Hill Cemetery in Braintree.