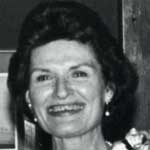 She was predeceased in death in 2011 by her husband, Leslie J. Wilson Jr.; they were married for 59 years.

She was born Elizabeth Marie Smith in Sutherland, Neb., the daughter of E. Dale and Lucy (Tilford) Smith. She attended St. Patrick Grammar and High Schools in North Platte, Neb. and graduated from Ursuline College in Louisville, Ky.

During World War II, she served as a lieutenant in the WAVES, attached to the staff of Commander Fleet Air Alameda (California). She received a commendation for her work in providing critical aviation material to naval air forces in the Pacific.

After the war she joined the New York publishing firm of Prentice-Hall, Inc., where she was assistant to the trade sales manager. While she was at Prentice-Hall, she met her future husband, also an employee of the firm. They were married in 1952.

After she and her husband moved to the Boston area in 1952, she was employed by the Personnel Department of Transitron, Inc., and then for over 20 years she was Benefits Administrator for AVCO-Everett Research Laboratories. She took early retirement in 1981.

During the 29 years that they lived in Wakefield, Betty was active in community affairs. She was a vice-president of the Wakefield League of Women Voters and president of the Wakefield Catholic Club. She served for three years on the Town of Wakefield Finance Committee. For nearly 10 years she was director and publicity chairman of Citizens’ Scholarship Foundation of Wakefield, the largest community-based scholarship-granting group in the country.

Upon her retirement from these duties in 1985, she was elected to the National Honor Roll of Citizens’ Scholarship Foundation of America.

In 1978 she and her husband purchased a condominium at Wood Rise and became year-round weekenders, getting to know many persons in Falmouth. When her husband retired in 1985 they became permanent residents of Falmouth. For more than 30 years she and her husband travelled widely in Europe. She shared his interests in reading and in golf and was a member of the Woods Hole Golf Club.

She served for several years as a hostess at the “Around the Table” meals site, as a “Friendly Visitor” and as a volunteer tax aide. She was a strong supporter of Birthright of Falmouth. She was a communicant of St. Patrick Church, where she served as a Eucharistic Minister and as a Lector.

A Funeral Mass will be celebrated at 11 a.m. on Tuesday, Aug. 18 in St. Patrick Church, 511 Main St., Falmouth. Burial will follow in the VA National Cemetery in Bourne.