Expos are one win away from Twi League championship 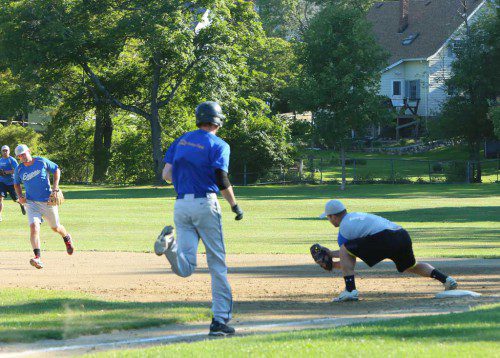 STEVE BOGHOS (left) makes the throw to Dave McDonald (right) at first base to get runner Matt Byrne out. Boghos and McDonald both had hits and McDonald scored one of the four Expos runs in their 4-1 triumph over the Brewers last night at Moulton Field. (Donna Larsson File Photo)

WAKEFIELD — The Expos took a 2-1 series lead over the Brewers last night in the Twi League playoffs at Moulton Field as they posted a 4-1 triumph in Game 3 of the best-of-five final.

It looked like the Brewers might score in the top of the third inning when they loaded the bases but came away empty. Tom Leahy led off with an infield single and then Joe Greer followed with a single to left. Mike Coombs drew a walk to load the bases but Expos pitcher Chris McNall managed to get a strikeout (looking), a pop up to the catcher and a ground out to short to end the threat.

The Expos didn’t waste their scoring opportunity in the bottom of the third inning.

With one out, Andrew Worden singled to left-center. Dave McDonald followed with an infield single. Both runners advanced on a wild pitch and then Tom Kelleher drew a walk to load the bases. Mike Cannata reached on an infield single deep in the hole at short, scoring Worden to make it 1-0. With the bases still loaded,  McNall walked to force in McDonald to give the Expos a 2-0 lead before a strikeout and a ground out ended the inning.

The Expos managed to extend their lead by a run in the bottom of the fourth inning.

John Grossi led off with a single to center and Steve Boghos singled to right. Brewers catcher Joe Greer threw down to second to try and pick off Grossi but the throw hit Grassi and bounced into center field to advance both runners. Worden walked to load the bases and then McDonald hit a grounder that third baseman Brian DiRuzza couldn’t handle, scoring Grassi to make it 3-0 and leaving all runners safe.

Kelleher reached on a fielder’s choice with Boghos erased at home and then Mike Cannata hit into a 4-6-3 double play as the Expos got just the one run.

The Brewers managed to get on the scoreboard with a run in the top of the fifth.

Leahy led off and reached on an error but was erased on a fielder’s choice by Greer. Coombs singled to put runners at the corners. Matt Byrne grounded to pitcher McNall who threw to second for a force out on Coombs. Shortstop Worden threw home but Greer was able to score on a close play at the plate to make it 3-1 before a fly ball to center ended the inning.

The Expos got the run back in the bottom of the fifth inning.

John Richards drew a one-out walk and then stole second. After a fly out to center, Grossi singled to center to score Richard to make it 4-1 where it would stand.

Game 4 of the best-of-five series is tonight at 5:30 p.m. at Moulton. The Expos will try to wrap up the championship while the Brewers will attempt to tie the series at two games apiece and force a Game 5 on Sunday at 5 p.m. at Moulton Field.