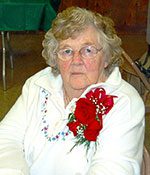 WAKEFIELD — Elsie M. Durkee, age 90 of Wakefield, died Monday Dec. 26 in Boston. She was born in Wakefield on November 26, 1926 and was the daughter of the late Douglas and Marion (Marston) Martin. She was raised in Wakefield and was a graduate of Wakefield High School, Class of 1944. She was a long time member of the First Parish Congregational Church and also a member of the Eastern Star. She was retired from the former Poly Paks Company of Wakefield where she was an office manager. She also enjoyed square dancing.

Mrs. Durkee was the beloved wife of the late Gerald A. Durkee. She was the loving mother of Gerald M. Durkee and his wife Donna of Fitchburg, Kenneth A. Durkee and his wife Christina of Stoneham, Deborah J. Olson and her late husband Alex of Raynham and the late Carol S. Durkee. She was the sister of the late William Martin and Joan Clark. She is also survived by her ten loving grandchildren and eight great grandchildren.

Her funeral service will be held in the McDonald Funeral Home
19 Yale Ave. Wakefield on Friday at 11 a.m. Visitation will be held at the funeral home prior to the
service beginning at 9 a.m.
Relatives and friends are invited to attend. Interment will be at Forest Glade Cemetery.