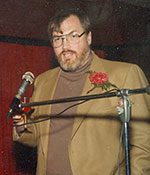 NORTH READING — John W. Applin, Sr., 76, of Wakefield passed away at the Meadow View Center in North Reading on Monday, Dec. 19, after eight years of dementia.

Born in Boston on January 4, 1940, he was the son of the late H. Herbert Applin, Sr., and Hilda (Forster) Applin of Watertown.

John was a graduate of Watertown High School and attended the University of Michigan and Boston University where he earned a Bachelor Degree in Business Administration. Following his academic pursuits he enrolled in the United States Naval Officers Candidate School in Newport, RI, where he graduated as an Ensign, and becoming a Lieutenant serving on the USS
Rigel out of Newport News, Va. His ship was one of many ready to serve during the 1963 Cuban Missile Crisis.

John was the devoted husband of 53 years to Brenda C. (Johnson) Applin. He was a loving father to his children, John, Jr., and his wife Donna of Malden, Christopher and his wife Tracy, of Hinesburg, Vermont and Amanda Applin and fiancé, Michael Moore, of Wakefield. John’s pride and joy was being a grandfather to Bradley and Caitlin Applin, Levon Applin and Chase Moore. Surviving John are his brother H. Herbert Applin, Jr. and sister-in-law Margaret of Pepperell, and his sister Carol Waldeier and late brother-in-law Tony of Waterford, Maine. He is also survived by nephew Gardner and nieces Jessie, Susan, Margaret, Sarah and their families.

John was employed at Itek Corporation of Lexington for 36 years and the Internal Revenue Service of Andover for 13 years before retiring. John’s great happiness and joy was spending time at the Applin’s summer home of 71 years in Waterford, Maine. John will be sorely missed for his musical contributions at his church and in his community. John was a choir member and soloist at The First Parish Congregational Church and a member of the Wakefield Community Chorale and Polymnia Society.

Memorial Service to be held at The First Parish Congregational Church, 1 Church St., on Saturday, Jan. 28 at 1 p.m. Relatives and friends are invited to attend.