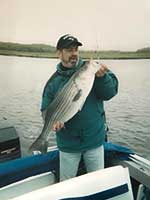 MELROSE — Erik A. Berg of Melrose, 64, passed away at home, surrounded by his family on May 26.

He leaves behind his devoted wife Linda, with whom he had recently celebrated his 43rd anniversary. Additionally, he was a loving father to Stefanie and her husband Dan, as well as Ali and her boyfriend Brad. He was adored by his grandchildren Lara and Rhett, his dog Bella, and his grand-dogs Fenway, Csonka and Lucy. He was a devoted son to the late John and Ada (Bachelor) Berg; and late mother-in-law Bernice Person-Abbott. He was a caring brother to Gretchen Habeeb. He was cherished by his many nieces and nephews and life-long friends.

Erik grew up in Malden, directly across the street from the love of his life, Linda. He graduated from Malden High in 1969 and later married in 1973. Erik attended Sylvania Technical School, where he studied computer engineering. He went on to spend the majority of his career working for NCR Corporation as a field engineer.

Those who knew Erik well knew that he was devoted to three things in life: His family; his four-legged friends Auggie, Bailey and Bella; and fishing on his boat. Erik enjoyed taking friends and family on his boat and nothing pleased him more than teaching his children and young nieces and nephews how to fish.

Erik loved the outdoors and spending weekends camping and fishing. He enjoyed vacationing with his wife; they were especially fond of their trip to Charleston, S.C. He was an avid fan of NASCAR and the Indy races, especially the Indianapolis 500. A devoted New England Patriots fan, he spent Sundays with friends and family watching football, hoping that his fantasy football team would come out on top. He was a jack-of-all-trades and enjoyed taking on home improvement tasks. From building decks to remodeling his bathroom, he was quite skilled and spent much of his life transferring his knowledge to others. Erik was a kind hearted person who would drop everything he was doing to help those in need. He will be remembered for his great sense of humor and his ability to make a room full of people laugh.

Over the past seven years of his life, Erik experienced multiple hospitalizations and setbacks. Throughout the adversity that he faced, his perseverance and courage was remarkable. He dreamed big and worked hard. He was strong-willed and fought until the end. Erik was charismatic and made a positive impact on everyone that he met. Though hearts are heavy, his family is comforted knowing that Erik will be reunited with his lost loved ones. Erik was the beloved husband of Linda D. (Person) Berg for 43 years.

Visiting hours were held at the Gately Funeral Home, 79 West Foster St., Melrose on Tuesday, May 31, followed by a Funeral Service in the Funeral Home. Burial will be private. In lieu of flowers, contributions may be made in Erik’s name to Tedy’s Team, 300 Fifth Ave., Suite 6, Waltham MA 02452.